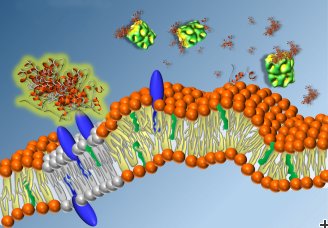 New clues about the molecular nature of Alzheimer’s disease
Alzheimer’s disease is a chronic neurodegenerative disorder that affects memory, thinking skills and other mental abilities. One of the hallmarks of the disease is the presence of amyloid plaques which accumulate between nerve cells in the brain.

Researchers have used neutron experiments to explore the toxic effect of amyloid species that arise during amyloid plaque formation. They found that these species caused increased rigidity in membrane model systems and that certain proteins can inhibit both the aggregation process and its effect on the membrane. This led to a recent publication in the Journal of Physical Chemistry.

The project builds upon previous work by several groups and combines the expertise of biophysicists from the Institute of Biophysics, the Marche Polytechnic University, the University of Grenoble Alpesand the ILL.

“At the IBF-CNR in Palermo, we have been studying amyloid β-peptide aggregation from a biophysical perspective for the last two decades,” explains Dr. Rita Carrotta a researcher from IBF-CNR, Italy, and co-author of the paper. Amyloid β-peptides are protein fragments which are produced naturally by the body. In the brain of an Alzheimer’s patient, for various reasons toxic amyloid β-oligomers and fibres form and interfere with normal brain functions, finally accumulating to form insoluble plaques.

As a part of a project funded by the Italian Ministry of Education, University and Research (Future in Research Program, “Multidisciplinary Investigations for the development of Neuro-protective Drugs”) coordinated by Dr. Maria Grazia Ortore from Marche Polytechnic University and Dr. Silvia Vilasi from IBF-CNR, the Italian researchers previously identified a specific group of proteins called chaperonins, and in particular the Heat Shock Protein Hsp60, which can interfere with amyloid aggregation.

Chaperonins get their name from the fact they act as molecular chaperones, helping to ensure that proteins behave themselves and don’t get into trouble by maintaining correct protein folding. Hsp60, found in humans and involved in several diseases, appeared to be particularly good at preventing amyloids from aggregating and damaging cell membranes.

“We wanted to find out more about the inhibiting effects of Hsp60, so we used neutron experiments to take a closer look at its molecular interactions,” says Dr. Rita Carrotta. The researchers teamed up with Université Grenoble Alpes researcher Dr. Marco Maccarini and ILL scientists, Dr. Ralf Schweins and Dr. Peter Falus, to study the effects of amyloid β-peptides on the cell membrane using small-angle neutron scattering and neutron spin echo experiments.

Neutron spin echo is a spectroscopy measurement. By firing beams of neutrons at a material and carefully analysing the speed of the scattered neutrons, it can be used to understand the dynamic properties of materials. Observations about how atoms and molecules vibrate, rotate and move reveal information which is often impossible to obtain using other techniques. In this case, the researchers used neutron spin echo to measure the membrane rigidity at the molecular level. “Neutron Spin Echo is a very high sensitivity spectroscopy technique”, says Dr Peter Falus. “It allows us to measure membrane bending rigidity on the atomic scale. This measurement on ILL instrument IN15 would not have been possible with any other instrument in the world.”

Next, they added amyloid β-peptides and intermediate species from the amyloid aggregation pathway to the vesicles. They found that these amyloid β-peptides species caused the membranes to become more rigid, suggesting that they can cause damage in living cells. However, when these molecules were added along with the chaperonin Hsp60, the membranes retained their elastic properties. The presence of even a tiny amount of chaperonin was enough to prevent membrane damage.

These results imply that the chaperonin Hsp60 is able to interact with amyloid β-peptides and intermediate molecules, interfering with the aggregation process and ultimately preventing plaques from forming. In effect, the chaperonins act like assistants in the cell, capturing the reactive species before they can do any damage.

The amyloid aggregation pathway is extremely complex and further studies are needed to elucidate exactly how the molecules interact. “The next step is to investigate in more detail the molecular mechanism by which Hsp60 is able to intervene in the aggregation and prevent damage to the membrane,” says Dr. Rita Carrotta.