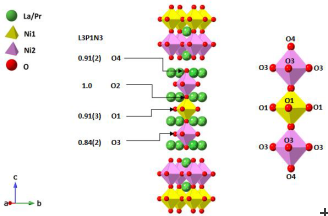 ISIS nuclear power Figure 1. Ruddlesden-Popper unit cells of L3P1N3 tetragonal I4/mmm structure. These structures are derived from Rietveld refinement of the neutron diffraction data collected at 800˚C. The oxygen site occupancies are given above along with magnified NiO6 octahedra bearing labelled O sites.

The unique properties of neutrons have enabled the study of potential fuel cell materials to understand the transport of oxygen within them and the contribution of ionic charge carriers to the total electrical conductivity.

In oxygen ion conductors, oxide ions are the predominant charge carriers. Oxygen ion conductors are used in many applications and have been studied extensively for solid oxide fuel cells (SOFC) devices. An interesting class of materials called Ruddlesden-Popper phases are being studied by researchers based at Imperial College by using neutron facilities at ISIS, and Oak Ridge in the United States, to understand the transport of oxygen in these materials.

The capability of neutrons to probe species with low atomic numbers provides a unique ability to investigate oxygen transport in these materials. In contrast to X-rays, which interact with the electron cloud of the atom, neutrons interact with the atomic nucleus. The neutron scattering length of an oxygen atom is large enough to make them easily detectable by neutrons.

Researchers have previously pointed out the significance of neutron scattering in oxide ion conductors because it can be used to determine the crystallographic positions of the oxide ions, their atomic displacement parameters and their occupancies, which are otherwise invisible to X-rays. These properties are used later to understand the oxygen conduction mechanisms.

The group from Imperial collected high-quality neutron diffraction data at the POLARIS Beamline at ISIS and POWGEN at Oak Ridge, which gave information including the crystallographic location, occupancy, and the isotropic or anisotropic atomic displacement of the atoms. All these parameters are of particular interest in materials with high oxygen mobility. 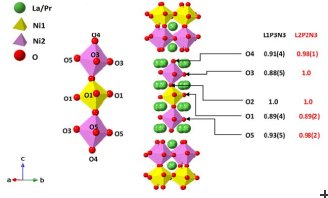 ISIS nuclear power Figure 2. Ruddlesden-Popper unit cells for L1P3N3 and L2P2N3 orthorhombic Bmab structure. These structures are derived from Rietveld refinement of the neutron diffraction data collected at 800˚C for L1P3N3 composition and 600˚C for L2P2N3 composition. The oxygen site occupancies are given above along with magnified NiO6 octahedra bearing labelled O sites.​

The group’s work illustrates the importance of neutron scattering for understanding the fundamental defect chemistry of such materials. The insights gained by such studies could inform future tuning of the materials to have superior performance. The group will further complement their work with total scattering studies to probe the local structure around these sites.