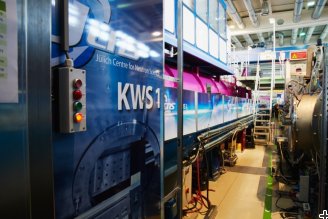 Neutron scattering has enabled scientists at Forschungszentrum Jülich to detect the formation of droplets in supercritical carbon dioxide at high pressure. This finding can be used to determine a phase transition within the fluid with greater accuracy.

Supercritical CO2 is used as a “green” solvent in industrial applications, as it is non-poisonous, chemically stable and reusable. Its physical state lies somewhere between a liquid and a gas. Only in the last few years has it become known that a phase transition could exist within a supercritical fluids, distinguishable by a slight difference in the mass density. Phase transitions are better known for occurring between gases and liquids or liquids and solids.

In this way, the so-called Frenkel line separates a gas-like and a liquid-like phase which can be differentiated according to their individual dynamics: in the gas-like phase, molecules move around solely by diffusion, whereas in the liquid-like phase, a vibration dynamic also comes into play. The exact pathway of the Frenkel line in supercritical fluids is so far unclear; various experimental and theoretical methods have produced differing results.

Dr. Vitaliy Pipich and Dr. Dietmar Schwahn from the Jülich Centre for Neutron Science have now shown at the Institute’s outstation at the Heinz Meier-Leibnitz Zentrum in Garching that neutron small-angle scattering is able to distinguish between the two phases. In particular, they were able to detect for the first time tiny droplets in the liquid-like phase. Further neutron measurements are necessary in order to determine the pathway of the Frenkel line over a larger temperature range and to analyze the character of the droplets in greater detail.

“Using our experimental data, computer simulations of supercritical CO2 which were up to now not very reliable can now be improved”, explains Schwahn. “In terms of industrial applications, this could prove very advantageous as processes can be more accurately predicted and thus better optimized.”

The scientists’ results are a by-product of their research on membranes for reverse osmosis desalination, used in the treatment of sea and wastewater to turn it into drinking water, particularly in dry regions. These membranes become contaminated due to the deposits of salts and organic materials, thus reducing their effectiveness and making them more expensive to use.

The researchers are in fact investigating how these deposits form and attempting to understand how these processes could be suppressed or slowed down. For this purpose, they developed, together with colleagues at Forschungszentrum Jülich, a special cell in which the desalination process could take place during the neutron experiments and be studied under conditions as realistic as possible.