ANSTO research may help preserve some of the world’s most important historic artefacts and buildings. 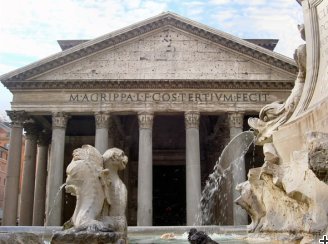 A recent international study led by ANSTO instrument scientist Vladimir Luzin is likely to be of interest to conservationists who are trying to preserve important marble sculptures and artefacts, such as Michelangelo’s famous sculpture of David.

“The fact of the matter is that physical weathering, deterioration and damage to marble and other architectural stones present a serious problem for the preservation of sculptures, monuments and buildings,” said Luzin.

David: A sculpture made from Carrara marble

Before its relocation in Galleria dell’Accademia, David, the “Giant”, was symbolically displayed in the political heart of Renaissance Florence, the Piazza della Signoria. Over a period of almost three centuries, the statue was exposed to the action of weather, historical events and inappropriate restoration works. These coexisting factors prevented the appropriate preservation of a masterpiece that, already at the time of its creation, was regarded as challenging by many artists—due to the presence of taroli, imperfections of the marble.

Today David is in a highly stable condition but still presents a contemporary scientific challenge from a conservation point of view. Researchers are monitoring marble cracking of the 4.3 metre David with a system of sensors that record vibrations, rotations and environmental conditions. [1] Conservationists monitor the sculpture because it is thought that even small mechanical impacts and small temperature variations are detrimental to marble.

Geologically marble is formed by the alteration (metamorphism) of limestone under high temperature and high pressure. The metamorphic process causes a complete recrystallization of the original rock into an interlocking mosaic of calcite and/or dolomite crystals with very specific mechanical behaviour.

Carrara marble, the stone used by Michaelangelo in sculpting David, was one of the most popular types of marble in the world because of its beauty and high lustre. For centuries it was quarried from the Apuan Alps in Tuscan Italy.

The popularity of Carrara marble was due in part to the wide range of varieties available (statuary, flowered, veined, brecciated, bardiglio, etc.), to the constancy of its quality, scarcity of defects, large size of single blocks that could be extracted, excellent physical and mechanical characteristics, and long-lasting strength and beauty.” [2]

However the suitability of marble from the Carrara area of Italy for buildings and artworks has been questioned because of ‘spectacular bowing behaviour’ of marble slabs on numerous modern buildings including the Amoco building in Chicago and the Grand Arche de la Defense in Paris.

A study of Carrara marble by a group of investigators led by Luzin have confirmed that microstresses caused by temperature variation and the thermo-mechanical properties of the marble itself help explain the deterioration. Co-investigators are Dimitry Nikolayev of the Joint Institute for Nuclear Research in Moscow and Siegfried Siegesmund of the University of Göttingen in Germany.

The investigators were interested in the different environmental conditions that influence marble deterioration and had to reproduce factors known to be important to the process of deterioration. Temperature effects were among those known to cause mechanical stress.

Luzin and collaborators used non-destructive neutron diffraction to confirm that thermally-induced microstress from a single thermal exposure can cause microcracking in the marble and therefore be responsible for weathering and deterioration of the marble. [3]

“Neutron diffraction is a useful tool and a non-destructive method to investigate the texture, phase composition and spatial and orientation dependence of strain in a bulk marble sample,” explained Luzin.

Although the commercial use of statue-grade Carrara marble is no longer allowed, an exception is made for restoration works and scientific research. Freshly cut marble from a quarry in Carrara, Italy was used for the testing.

“Although not easy, stress measurements in geological materials, such as marble are feasible and provide valuable characterisation,” said Luzin.

He explained that the challenges are related to the need to measure two phases with sufficient accuracy. It is necessary to use a large gauge volume because of the coarse grain microstructure and longer measurement time in order to capture very delicate effects of microstress in calcite and dolomite—which are also very weak neutron scatterers.

The neutron high resolution powder diffractomter, Echidna, determined the amount of each phase in two cube samples of marble. In one sample, the dolomite comprised a volume fraction of 28 per cent and in the other it was 18 per cent, which is not surprising given the highly visible non-uniform distribution of dolomite in the marble.

The Kowari diffractometer was used to produce pole figures, graphical representations that capture the preferred crystallographic orientation (texture) of the calcite and dolomite. “A weak crystallographic texture in both phases was confirmed in the neutron diffraction experiment,” said Luzin.

The stress experiments were carried out using the Kowari diffractometer in a specially designed sample environment unit in order to control temperature. “We took measurements of the calcite and dolomite phases at room temperature and at 80° C.”

Using a technique to measure the stiffness of an elastic material, the researchers were able to accurately measure the accumulated damage after a thermal exposure that could be unambiguously attributed to microcracking.

“Evidently, a significant change in microstress caused micro-cracking in the marble sample due to temperature changes,” said Luzin.

“We have a responsibility to try and preserve great works of art and architecture with non-destructive techniques and nuclear technologies give us the means to do this. Hopefully David and other important monuments can be preserved in the centuries to come,” said Luzin.