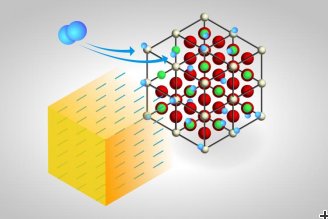 Having the right tool for the job enabled scientists at the Department of Energy’s Oak Ridge National Laboratory and their collaborators to discover that a workhorse catalyst of vehicle exhaust systems—an “oxygen sponge” that can soak up oxygen from air and store it for later use in oxidation reactions—may also be a “hydrogen sponge.”

The finding, published in the Journal of the American Chemical Society, may pave the way for the design of more effective catalysts for selective hydrogenation reactions. Selective hydrogenation is the key to producing valuable chemicals, for example, turning triple-bonded hydrocarbons called alkynes selectively into double-bonded alkenes—starting materials for the synthesis of plastics, fuels and other commercial products.

“Understanding how molecular hydrogen interacts with ceria [cerium oxide, CeO2], however, is a big challenge, as no regular technique can ‘see’ the light H atom. We turned to inelastic neutron spectroscopy, a technique that is very sensitive to hydrogen,” said ORNL chemist Zili Wu. At ORNL’s Spallation Neutron Source (SNS), a DOE Office of Science User Facility, a neutron beam line called VISION probed vibrational signals of atomic interactions and generated spectra describing them. “Because neutron spectroscopy could ‘see’ hydrogen due to its large neutron scattering cross-section, it succeeded where optical spectroscopy techniques failed and enabled the first direct observations of cerium hydrides both on the surface and in the bulk of a cerium oxide catalyst,” Wu said.

In vehicle engines, oxygen is needed for hydrocarbon fuel to burn. The exhaust that is generated contains deadly carbon monoxide and unburned hydrocarbons. In the catalytic converter, the catalyst cerium oxide grabs oxygen from air and adds it to carbon monoxide and hydrocarbons to turn them into carbon dioxide, which is nonlethal. The finding that cerium oxide may grab hydrogen as well as oxygen is promising for efforts to engineer it to catalyze both reactions that cause electron gain (“reduction” of a reactant) and electron loss (“oxidation”).

Two mechanisms have been proposed to explain the interaction between molecular hydrogen and cerium oxide. One suggests both hydrogen atoms associate only with oxygen atoms to produce the same product (two hydroxyl species, or OH chemical groups) on the surface. In the other mechanism posited, one hydrogen atom associates with an oxygen atom to make OH and the other hydrogen atom associates with a cerium atom to make cerium hydride (CeH). The former mechanism is termed “homolytic,” and the latter is called “heterolytic.”