Congress on Ancient Bronzes to meet at the PSI

Almost 4,000 years ago, a decorated axe was laid into a grave alongside the deceased near Lake Thun – a unique artefact for this area and period, fashioned out of bronze and copper and adorned with gold. Experiments conducted at the Paul Scherrer Institute have now made it possible to determine how the axe was made and afford a glimpse over the shoulders of the Bronze Age craftsmen. This is thanks to the technique of neutron imaging, which can be used to generate an accurate, three-dimensional image of an object’s interior – without damaging the item in the slightest. The images also revealed how the axe was cast and the gold decoration was added. In order to generate the images, the researchers beamed neutrons from the Paul Scherrer Institute’s neutron source SINQ onto the axe from various angles. In doing so, they exploited the fact that, unlike x-rays, neutrons penetrate metals well and thus afford a glimpse inside solid metal objects. The experiments were then followed up with x-ray measurements at the PSI’s Swiss Light Source, a synchrotron that enabled the exact chemical composition on the surface of the axe to be determined. The experiments were conducted on behalf of the Historical Museum of Berne. For the last decade, the PSI has been collaborating with various museums and archaeological institutions both in Switzerland and abroad. The fact that the 18th International Congress on Ancient Bronzes, which is to be held at the University of Zurich from 3 – 7 September, will also be meeting at the PSI for one day is a testament to the success of the cooperation. 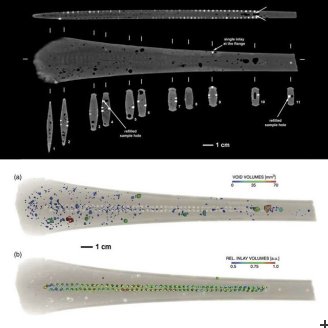 In December 1829 the Bronze Age grave was discovered near Lake Thun. Its occupant, a man, had been buried with a large number of artefacts, including an axe with a handle adorned with two rows of golden lozenges on both sides. This decorative technique is unique for such Bronze Age axes. Needless to say, on the one hand archaeologists would like to understand where and how the axe was made. On the other hand, however, it is also out of the question for them to damage the artefact in order to look inside it. All that was known from previous studies was that the handle was primarily made from bronze but that the strips bearing the gold adornments consist of copper. The adornments themselves comprise a natural alloy of gold and silver that is also known as electrum.

The glimpse inside the axe was made possible by the neutrons from the PSI’s SINQ neutron source. This involved “screening” the axe with neutrons from different directions. Each of these scans yields a radiograph, in other words a fluoroscopic image much like an x-ray at the doctor’s. From the ensemble of these images, the overall material distribution within the axe could be determined and depicted in a 3D image. This revealed that there were many bubbles inside the axe, which grew increasingly bigger towards the handle. This suggests that the axe was cast with the handle pointing upwards, which caused the bubbles to accumulate. It is unclear whether the bubbles were formed because the air was not removed successfully from the metal during casting or because water from the mould got into the metal. Although the second possibility would be evidence of an unusual casting technique using a mould made of clay or wax, it would explain how it was possible to produce the fine grooves for the copper strips.

Origin of the gold adornments explained

The neutron experiments also explain how the gold adornments came about. For instance, the images clearly show that the decorations were only attached to the surface and did not comprise golden nails that penetrated the entire blade. Evidently, the craftsmen drilled holes for the adornments into the copper strips on the blade and hammered in small pieces of gold that they had cut from a thin gold bar beforehand. The neutron images even show clearly that the gold did not completely fill the hole, leaving a small cavity around the gold at the bottom.

The chemical composition at the surface of the axe was studied with synchrotron light at the PSI’s Swiss Light Source. Synchrotron light is a special form of x-ray that has many advantages over conventional x-rays: it is considerably more intense and its properties can be fine-tuned to suit the needs of the experiment. In this case, not only did the researchers want to determine which chemical elements the axe contained with the synchrotron light, but also detect individual chemical compounds. With this in mind, they beamed synchrotron light onto various points on the axe and observed the direction in which an especially large amount of light was reflected. This enabled them to determine the components of the corrosion layer that had formed on the bronze. This form of the process, where the sample is not x-rayed and the light is reflected instead, is novel for historical objects. The experiment revealed that it can yield key information when studying archaeological objects.

The sciences and humanities should get to know each other

“Since 2003 we have been collaborating successfully with museums, universities and archaeological authorities and studying a vast range of archaeological and art history objects,” explains Eberhard Lehmann, who is in charge of neutron imaging at the PSI. The fact that the 18th International Congress on Ancient Bronzes is to meet at the PSI for a whole day is a testament to the respect that the institute has earned as a partner. “It’s unusual for a humanities congress to convene at a scientific research centre. For us, it’s an opportunity to understand better how arts scholars carry out their science and which issues they tackle, and thus see how we can support them with our research methods,” stresses Lehmann. “And our colleagues get the chance to see what our research methods can achieve. One or two of them might even recognise that he can study his objects here.” As Daniel Grolimund, a scientist at the SLS, stresses: “One advantage at the PSI is that the institute offers several complimentary research techniques. For instance, you can explore an object’s interior with neutron imaging while synchrotron light experiments reveal the chemical composition at the surface and the nature of a potential coating.”