Neutrons assist in the development of sustainable electricity grids 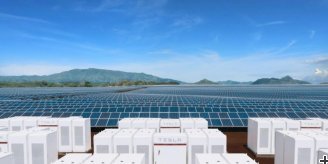 With sponsorship from Tesla Motors, one ‘Gold medal’ Canadian scientist is using neutron beams in the quest to reduce the cost of energy storage technologies, which is vital for the widespread adoption of renewable energy sources and electric vehicles.

Although solar panels and wind turbines abound, the inability to store the energy they produce for later use has been a major limitation on the deployment of renewable energy in electricity grids.

“Storage is a piece that’s been missing from the grid for a hundred years. But that’s starting to change.”

Tesla Motors’ Chief Technology Officer, JB Straubel, says that without large-scale energy storage capabilities, no more than 20 to 30 percent of electricity can come from these renewable sources. That’s because, due to technological limitations, storage has simply been too costly. Indeed, according to Straubel, “Storage is a piece that’s been missing from the grid for a hundred years.” But that’s starting to change.

Tesla Motors, which is better known for making electric vehicles that use energy stored in lithium-ion batteries, has recently launched itself into the electricity market by offering up its own energy storage technology. For example, in March 2017, Tesla opened a solar energy facility in Kauai, Hawaii, that uses 52 megawatt‑hours (MWh) of storage capacity to deliver reliable electricity 24 hours a day, thereby helping to reduce the island’s dependence on diesel imports. Ta’u, an island in American Samoa with a population of 600, has operated on nearly 100 percent solar power since November 2016 thanks to its own Tesla energy facility, which can store enough energy to power the island for three days without sunlight. “This wasn’t really at all possible five or ten years ago,” Straubel points out. “Storage is quite a new thing.”

While Kauai and Ta’u represent major steps forward in terms of energy storage, the capacity of these facilities represents only a miniscule amount of the daily electricity used in higher-populated areas. For instance, in January 2017, Tesla opened an energy storage facility in southern California—its largest one to date. This facility, which is rated at 80 MWh and stores enough energy to power 2,500 homes for a day, reduces the need to burn natural gas during peak times of demand. 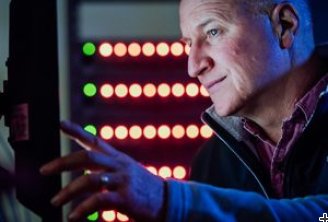 Yet many more energy storage facilities would have to be established before renewables can provide a dependable supply of electricity when the sun isn’t shining and the wind isn’t blowing. At the moment, however, such storage capacity is cost prohibitive. Indeed, the high cost of lithium-ion batteries is the single largest barrier to the mass adoption of energy storage facilities (and to the widespread use of electric vehicles as well).

“To store energy on the scale required for large electricity grids, I think, is probably one of the top two or three problems facing humanity at this time.”

Professor Jeff Dahn of Dalhousie University is taking up the challenge of reducing the cost of these batteries. For his many past contributions to the development of today’s lithium-ion batteries, Dahn was the recipient of Canada’s top research prize, the Gerhard Herzberg Canada Gold Medal for Science and Engineering, in 2017. Enthused by his trailblazing efforts, Tesla began to sponsor his research program and even established a Tesla R&D centre near Dalhousie in 2016.

Specifically, Dahn’s partnership with Tesla aims to improve lithium-ion battery storage while also bringing down the cost. “One of our approaches is to look for materials that could increase the energy density,” explains Dahn. “A 20 percent increase in energy density, for example, would produce about a 20 percent reduction in cost for an equal amount of energy storage.”

Lithium-ion batteries are simple devices. Two electrodes, typically metals, either release or absorb lithium ions. A liquid medium, called the electrolyte, allows the lithium to move from one electrode to the other. Since the lithium is electrically charged, its movement creates electricity. 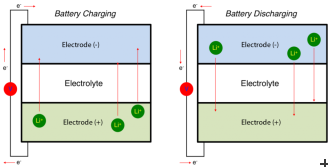 In general, when the voltage is raised, a battery’s energy density goes up as well. If the voltage is too high, however, the electrodes degrade, shortening the battery life. Thus, to determine the optimal voltage to balance energy density and battery life, it is first necessary to establish exactly how the electrode material behaves as a function of voltage while under the conditions of an operating battery.

One of Dahn’s recent projects has focused on a material designated as NMC, a member of a class of inexpensive nickel–manganese–cobalt materials that have the potential to withstand higher voltages and attain higher energy density while still achieving a relatively long battery life.

Like most scientists who study materials, Dahn uses an array of research tools that vary depending on the nature of the material and the research questions involved. Often, for particularly challenging problems where other tools such as x‑rays are inadequate, materials researchers employ neutron beams.

For Dahn, it was clear that the only way he could observe the molecular-level structural changes occurring in NMC under operating battery conditions was by using neutron beams. Neutrons are more sensitive than x‑rays in terms of detecting lighter atoms such as lithium when heavier atoms like nickel, manganese, and cobalt are also present. What’s more, neutrons are distinctly better than x‑rays at distinguishing between these three metals.

Consequently, Dahn’s research team set out to bring down the cost of deuterated electrolyte for use in lithium-ion battery experiments. Dahn’s team began by examining several solvents (i.e., liquids that act as the base material for the electrolyte) that were relatively easy (and inexpensive) to deuterate. In research published in 2015, the researchers showed that deuterating the most promising of these solvents—ethyl acetate—did not affect the performance of the battery even after many cycles of charging and discharging.

“Dahn’s Australian collaborators are beginning to use this cost-effective electrolyte in their own battery research programs.”

Building on these results, Dahn’s team once again turned to neutron beams to conduct further examinations of NMC under operating battery conditions using their lower-cost electrolyte. This set of experiments shed some necessary light on the changes occurring at the molecular level during battery charging. For instance, findings published in a second paper in 2015 showed that NMC’s crystal structure expands in one direction as it absorbs lithium ions during charging. Furthermore, this expansion is reversible so long as the voltage doesn’t exceed a threshold of 4.7 volts—a particularly notable result not only because reversibility implies that the material is chemically stable under these conditions, but also because conventional lithium-ion batteries (which use LiCoO2) can typically operate at only 4.2 volts.

The prospect of running batteries at 12 percent higher voltage—especially while using less expensive materials—is enticing, as it could translate into significant cost reductions for large-scale energy storage facilities, which require many thousands of batteries. It could also lead to the increased affordability of electric vehicles, since the batteries are a major part of the cost of these vehicles.

Using a variety of experimental techniques, Dahn’s team has continued to explore the prospects for using NMC in lithium-ion batteries. In the period following their neutron beam experiments, the researchers published three more papers reporting on the positive effects that various additives to the electrolyte have on battery performance. Based on their research, they have filed a patent for an improved electrolyte that uses additives to enhance performance in several key areas, including longer battery life, increased safety, and faster charging. Notably, the patented electrolyte also provides better tolerance to high voltage, which allows for increased energy density.

Despite the substantial headway that energy storage technologies have made in recent years, Dahn believes that much more progress is needed. “To store energy on the scale required for large electricity grids, I think, is probably one of the top two or three problems facing humanity at this time,” emphasizes Dahn. “So the next generation of researchers and current researchers really have to step up to the plate and work on this problem.”