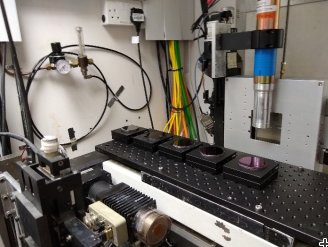 Scientists from The University of Sheffield are studying the layered structure of highly efficient organic thin films for cheaper, more environmentally friendly, solar energy technologies.
Solar Photo-Voltaic (PV) energy is the fastest growing renewable energy source worldwide. Silicon is the most widely used material for making the solar panels commonly seen on buildings and in solar farms. Although silicon PV panels can efficiently convert sunlight into electricity, they are expensive to manufacture and their rigid, heavy structure limits design applications. Technologies incorporating carbon-based (organic) materials are an exciting alternative offering low-cost, scalable and non-toxic processing routes with the potential for flexible, lightweight devices.

What is an organic solar cell?

An organic solar cell is a device containing carbon-based semiconductors that can absorb sunlight to make electricity. Typically, organic solar cells have a layered structure comprising of a light-harvesting film sandwiched between two electrodes. Most organic solar cell research concerns thin films that contain two different carbon-based materials (an electron acceptor and an electron donor). These materials have complementary energy levels to allow for efficient charge generation and extraction. In the past few years, there has been somewhat of a breakthrough in the design and synthesis of new materials for organic solar cells. Efficiencies greater than 14% are now achievable, compared to silicon solar cells, which are capable of efficiencies between 15-25%.

One of the benefits of organic solar cells is that they can be solution-processed using relatively small amounts of material. For example, in the laboratory, organic thin-films are typically deposited by spin-coating, whereby a small amount of solution is pipetted onto a rapidly rotating substrate. The solvent evaporates, leaving behind a thin, glassy film. The problem is that the resultant structure of the thin film is highly dependent on the processing conditions used such as the casting solvent environment and post-deposition treatments such as thermal annealing. Understanding how these processing parameters relate to the structure of the film and the resultant device PV performance is key to pushing efficiencies further.

The role of ISIS

The group from Sheffield used neutron reflectivity measurements on SURF at ISIS to investigate the chemical composition of a range of high efficiency organic thin films that had been processed in different ways.

By looking at vertical cross-sections of the films, they found that the two components of the film are not equally mixed along the vertical direction.

Rather, an ‘enrichment-zone’ is found at both the top and bottom electrode interfaces. If there is a build up of one material at an interface, this can significantly affect the movement and collection of charges through the material, influencing the overall performance of the device.

The data collected at ISIS, along with real device measurements at Sheffield, will help researchers control the composition of such interfaces through film processing, with the aim of increasing the efficiency of organic solar cells so they can reach their full potential.