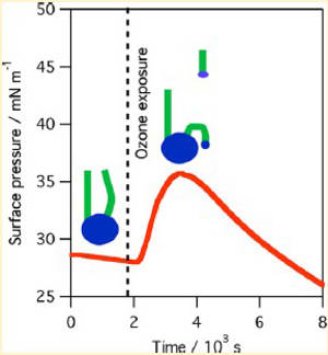 A research team from Birkbeck and Royal Holloway Colleges at the University of London, and Uppsala University in Sweden, have helped explain how ozone causes severe respiratory problems and thousands of cases of premature death each year by attacking the fatty lining of our lungs. In a study published in Langmuir, the team used neutrons from the Institut Laue-Langevin in Grenoble and the UK’s ISIS Neutron Source to observe how a relatively low dose of ozone attacks lipid molecules that line the lung’s surface. The presence of the lipid molecules is crucial for the exchange of oxygen and carbon dioxide, as they prevent the wet surfaces of the lung from collapsing.

Ozone is mostly produced in the upper atmosphere as the sun’s UV light splits oxygen molecules, but it can also form at ground level from burning fossil fuels. It is known to harm our respiratory systems and is linked to asthma, bronchitis, heart attacks, and other cardiopulmonary problems. A recent study published by the Bloomberg School’s Department of Environmental Health Sciences found that stricter ozone emission regulations in the US could prevent over a thousand premature deaths, and over a million complaints of respiratory problems each year [1].

However, it remains unclear how exactly ozone causes this damage. One theory is it attacks the lung’s surface layers which consist of a layer of water sitting below a mixture of fatty molecules called lipids and proteins that are together known as lung surfactant. This mixture aids the exchange of oxygen and carbon dioxide during breathing. It does this by reducing surface tension, i.e. the attraction that molecules feel for each other, in the surface layer above, causing these fluids to spread out and provide a greater surface area for gas exchange.
Critically, a lack of adequate surfactant, a deficiency often found naturally in babies born prematurely, can produce similar respiratory health complaints to those mentioned above, even resulting in death in some cases. This link was further established in 2011 by the same team from Birkbeck who demonstrate that ozone reacted very strongly with the lipid layer, damaging it. However, what exactly is going on and how these reactions might impede the surfactant from doing its job was still unclear.

To investigate further Dr Katherine Thompson from Birkbeck and her team ran neutron reflection studies at the Institut Laue-Langevin in Grenoble and ISIS Neutron Source in Oxfordshire on an artificial lipid monolayer, created to mimic the lung surface. The lipid layer was exposed to a dilute gaseous mixture of ozone, and changes in its structure or surface tension were studied in real time. The concentration of ozone was around 100 parts per billion (0.1 ppm), equivalent to what you might get in a polluted city in the summer.
The use of neutrons meant that Dr Thompson could label different parts of the sample using deuteration, a process whereby a heavier isotope of hydrogen is introduced and contrasted with undeuterated samples to pick out the location of hydrogen atoms. This allowed them to monitor different parts of the molecule separately as they react with the ozone.

Using this technique Dr Thompson’s team showed that one of the lipid’s upwards-facing tails, known as the C9 portion, breaks off during the ozone degradation and is lost from the surface completely. The portion still attached to the lipid head then re-orientates itself and penetrates into the air‐water interface. The loss of the C9 portion causes an initial decrease in surface tension which temporarily increases surface area for gas exchange and efficient respiration. However this effect is short-lived as the penetration of the rest of the molecule into the water results in a slow but pronounced rise in surface tension, to a level that ultimately produces a net increase.

The next step for Katherine and her colleagues is to look at adapting the model, to represent the condition of people with various forms of chronic respiratory problem and attempt to understand why ozone seems to affect them worse than others.

Dr Katherine Thompson, Birkbeck, University of London: “We are not completely sure what causes the second stage of tension increase. The damaged lipid might be slowly dissolving in the water and leaving the interface entirely, or a slow reaction might be occurring that is damaging another part of the lipid not directly attacked by ozone. What we can say is that the slow increase in surface tension that occurs as a result of the ozone exposure would certainly damage the ability of our lungs to process oxygen and carbon dioxide, and could account for the respiratory problems associated with ozone poisoning.”

Dr Richard Campbell, Institut Laue-Langevin; “Neutrons are an ideal tool for studying biological materials, particularly their reactions and interactions on surfaces and across interfaces. They are highly sensitive to lighter atoms such as carbon, hydrogen and oxygen that make up these organic molecules and isotopic labelling can be used to determine the structure and composition of interfacial layers. As one of the world’s brightest neutron sources, the ILL has a long history of modelling important micro-scale processes that take place inside our bodies and providing ground-breaking insights that inform the next generation of treatments.”