St. Salvator Especially at the head of the St. Salvator figure, the damage caused by the improper restoration was clearly visible. | © Rathgen-Forschungslabor

Restorers often have to deal with negative or even damaging consequences of conservation measures from earlier years. The church of St. Laurentius in Tönning / Schleswig-Holstein was also affected, because two valuable wooden figures from the beginning of the 18th century were distorted by an earlier treatment of wood preservatives.

The two wooden figures were preserved in 1903 with coal tar oil (carbolineum). At that time the carbolineum could still be used against wood pests; today the polycyclic aromatic hydrocarbon compounds (PAHs) are considered to be carcinogenic and environmentally harmful. They can therefore only be used in very few special cases. In this case the art works showed not only irregular black spots on the outside, but they also smelled strongly and unpleasantly because of the coal tar oil. The scientists from the Federal Institute for Materials Research and Testing, the Rathgen Research Laboratory (BAM), the Landesamt für Denkmalpflege Schleswig-Holstein, the Dresden Academy of Fine Arts, the Landeskirchenamt of the Evangelical Lutheran Church in Northern Germany, and the restorer Markus Freitag were faced both with an optical as well as a health problem and searched for a suitable decontamination procedure. The visible spots also suggested that the biocide was unevenly distributed internally. 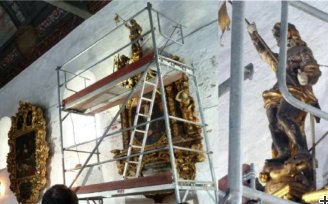 The antiques were first examined with X-ray radiography and computed tomography. In order to obtain pictures from the interior of the wooden figures, the radiographs did not work because they could not make visible the slight contrasts between wood and biocide since both are very hydrogen-containing. The figures had a considerable volume, so fast neutrons were necessary. Thermal neutrons would not have had sufficient energy, and would have penetrated only a few centimeters because of the high hydrogen content. The figures therefore came to the MLZ in Garching to be examined with fast neutrons on the instrument NECTAR.

This task, however, was not easy even with neutrons, as it was first necessary to investigate whether the differences between wood and biocide could actually be visualized. Then they had to find out, how bulky the wood could be. The scientists of the Institute of Radiochemistry at the Technical University of Munich and the BAM therefore made preliminary neutron experiments with woods of various thicknesses and compared some of their acquired images with X-ray images in order to be able to see the differences more precisely. They found that, despite a thick steel plate, the annual rings of the wooden part and the holes filled with plasticine were well visible in the wood – up to a thickness of about 50 cm. Up to a wood thickness of 2 cm the scientists could have recognized such details even with the lower energetic thermal neutrons.

The aim was to make visible the density distribution of the biocide in the figures with neutrons and to use the X-ray tomography for the structural details. This goal was achieved: On the neutron images, the distribution of the coal tar oil in and on the two figures was good, the radiographs showed some other details, which probably contained calcium and could not be seen with neutrons.

Could the two figures be saved according to historical preservation aspects?
Dr. Amélie Nusser from the Rathgen Research Laboratory and co-author of the publication: “Thanks to the experiments the wood figures were almost completely decontaminated of the chemical and environmentally toxic carbolineum by vapor phase extraction with dichloromethane. In the future, further optimization of the extraction agent should be carried out in order to obtain oil-bound fixtures. Furthermore, a plant similar to the bone degreaser should be designed, which can be operated with an optimized solvent or mixture which is gentle to the mount.”