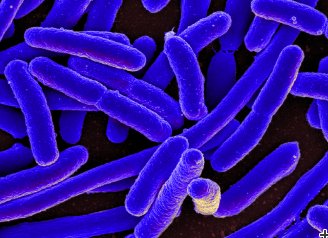 Bacterial infections can be lethal and are becoming increasingly resistant to antibiotics. Six million people dye of blood poisoning (sepsis) every year.
The use of neutrons to analyse complex structures on the surface of E.coli could reveal how bacteria interact with their surroundings.
This research may provide new possibilities for the development of antimicrobial agents.

Researchers have been using neutrons to explore the complex outer surfaces of the bacterium Escherichia Coli (E.coli), and they have revealed in the process, with great precision and detail, how such bacteria interact with their surroundings. Understanding these interactions is crucial, as E.coli infections can be lethal. They lead to fatal sepsis if untreated, killing 6 million people every year.

This research was conducted in a collaboration between the Institut Laue-Langevin (ILL) and the Max Plank Institute of Colliods and Interfaces. It focused on lipopolysaccharides (LPS), the carbohydrates found on the surface of E.coli. LPS molecules are responsible for a wide range of infections; they cover roughly 75% of the surface area of all gram-negative bacteria and play a key role in how the bacteria affect the human immune system.

Using neutron reflectometry, the team analysed the structure of the outer surface of the LPS and tested its response to various conditions, including the absence of positively charged calcium ions which influences the structure of bacteria, making them vulnerable to antimicrobial compounds.

The research was conducted on the D17 instrument at the ILL, one of the Institute’s two public reflectometers. The scientists were able to examine the biological surfaces in a realistic environment and draw more accurate conclusions about the intricate mechanisms at play. This understanding of the interactions taking place on the surface in various conditions will help researchers establish novel approaches in the development of antimicrobial agents.

This study takes into account the true complexity and molecular significance of LPS, without relying on a simplification of the O-side chains or neglecting the core carbohydrates – which has been the classic approach to date. It gives scientists a clearer understanding of the finer structural details of the bacterial outer surfaces. Whilst previous studies have focused on bacteria in isolation, these results could provide a better understanding of how drugs perform within bacterial colonies, for example. We can now test more realistic predictions on how bacteria will respond to drugs in a certain environment. This could assist in the development of new antimicrobial treatments, and it promises progress in the battle against drug-resistant bacteria.

According to Giovanna Fragneto, co-author of the study and Head of the ILL Soft Matter Science and Support group: “This study relied on the unique set of tools offered by neutron science to increase our understanding across a range of life sciences. Neutrons are showing us how we can investigate bacteria in the future.”

For Emanuel Schneck, another co-author, from the Max Planck Institute of Colloids and Interfaces Biomaterials Department “The experiments have helped improve our understanding of the structure of bacterial outer surfaces. Neutrons have given us more detail on the way bacteria act in their real environment, especially within colonies. It’s a very exciting project, with great potential for drug design in the long term.”