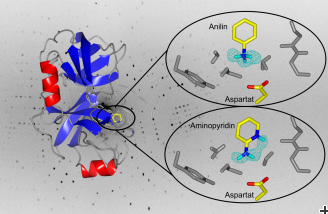 Trypsin Left side: the enzyme trypsin in ribbon presentation. Right side: close-up of the binding pocket. The chicken wire structure in cyan represents the measured density for the hydrogen atoms of aniline and aminopyridine. The head-group of aniline clearly possesses 3 hydrogen atoms and is therefore positively charged. The head-group of aminopyridine carries only 2 hydrogens. Here the pyridine-type nitrogen in the ring system is protonated. | © A. Ostermann / FRM II, TUM

Once again, the instrument BioDiff at the MLZ has located with highest accuracy hydrogen atoms of various inhibitors when binding to the enzyme trypsin. The results, which are important for the prediction of binding properties of new substances in drug research, have now been published in the journal Angewandte Chemie.
Biomolecules often bind to their partners via so-called hydrogen bonds. In most cases, however, the decisive hydrogen atoms are difficult to determine in their position, because X-rays can make hydrogen atoms visible only in rare cases. Neutrons, however, have the advantage that they are scattered on atomic nuclei; here, other rules apply with regard to the scattering strengths. However, the exact knowledge about the position of the hydrogen atoms on relevant molecular groups is crucial if new drugs are to be developed in pharmaceutical research. The active substances are usually weak acids or bases, and they change easily between the protonated state (with hydrogen atom) and the deprotonated state (without hydrogen atom).

The scientists from the Philipps University of Marburg and the Istituto Italiano di Tecnologia from Genoa have now investigated the binding of the two inhibitors aniline and 2-aminopyridine to the enzyme trypsin. Trypsin was used as a model enzyme for the class of so-called trypsin-like serine proteases, which are mainly involved in the digestion process, but also in blood coagulation, as well as in cancer metastases or the immune response, and in these processes cleave proteins at specific sites. For example, trypsin recognizes and cleaves a peptide bond of a protein (the substrate) always after the strongly basic amino acids arginine and lysine. For this specificity, a negatively charged amino acid is responsible in the binding pocket of trypsin. Substrate-like inhibitors with strongly basic head groups become protonated upon binding to the binding pocket and thus are positively charged. However, it was not clear whether binding partners with a weakly basic head group also bind in the protonated state. To investigate this, the two inhibitors aniline and 2-aminopryridine, whose chemical properties are well characterized, were investigated by binding to trypsin. Aniline carries a weakly basic head group, 2-aminopyridine is very similar in structure, but has an additional group which can be protonated in principle.

The scientist from the University of Marburg measured at the BioDiff neutron diffractometer which is joined instrument of the Technische Universität München and the Forschungszentrum Jülich. TUM scientist Dr. Andreas Ostermann handed them data sets with the highest resolution achieved so far for proteins with more than 100 amino acids. Thus, the researchers were able to determine very precisely the protonation states of the inhibitors: the head group (amino group) of aniline is clearly protonated and thus positively charged. The scientists had not predicted this because of the weak basicity. The head group of the 2-aminopryridine is more basic than that of the aniline, but surprisingly the amino group is not protonated upon binding to trypsin but the proton is attached to the ring nitrogen despite a greater distance from the negatively charged amino acid in the binding pocket. Molecular-internal electronic effects that determine the stability of the protonation states and not the shorter distance to the opposite charge are responsible for this difference. A correct prediction, where drug-type molecules are protonated and therefore how their charge state looks exactly, is crucial for the planned development of new drugs.