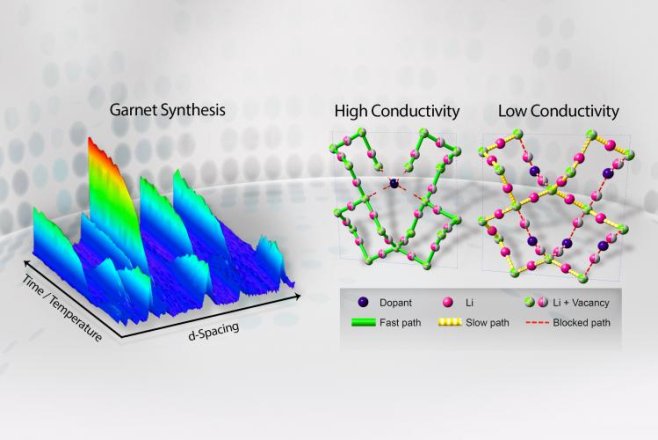 Although they don’t currently have as much conductivity, solid-state electrolytes designed for lithium-ion batteries (LIBs) are emerging as a safer alternative to their more prevalent—sometimes flammable—liquid-electrolyte counterparts.

However, a new study conducted at Oak Ridge National Laboratory’s Spallation Neutron Source (SNS), a Department of Energy Office of Science user facility, has revealed promising results that could drastically boost the performance of solid-state electrolytes, and could potentially lead to a safer, even more efficient battery.

Using neutron diffraction techniques via the VULCAN instrument, SNS beam line 7, lead instrument scientist Ke An and his team recently concluded an in-depth study probing the entire structure evolution of doped garnet-type electrolytes during the synthesis process to unravel the mechanism that boosts the lithium-ionic conductivity. Their findings were recently published in the journals Chemistry of Materials and the Journal of Materials Chemistry A.

“The question we want to answer is how can we correlate the material’s structure with its performance,” An said. “Finding an answer to this will be very useful to the materials community, particularly in the field of electrochemical devices like batteries.”

The problem with liquid electrolytes, says An, is that while they can produce high levels of conductivity—which is good—in some cases, they become flammable under high voltages or high temperatures, causing the battery to “explode”—which is obviously very bad.

In general, solid electrolyte-based LIBs consist of two electrodes, a positive and a negative, and an electrolyte in the middle, forming the battery’s core, which facilitates the movement of ions traveling back and forth between the electrodes. In order to achieve a desired level of conductivity in the electrolyte, ions require vacancies in the crystal structure, or tunnels for the ions to “hop” to and from—kind of like connecting the dots.

Lithium lanthanum zirconates, or materials based on Li7La3Zr2O12 with a garnet structure, are favorable for application as electrolytes because they promote fast lithium transport. However, explained An, synthesized garnets often develop unwanted low-conductivity secondary phases, which in some cases can be detrimental to electrolytic performance. Essentially what that means is that useful vacancies for ions to “hop” don’t always develop where designers want them to.

During synthesis, myriad chemical reactions take place as the material goes through several different phases, beginning with the mixing of chemicals or materials, then annealing, or heating the structure for desired performance and consistency, followed by a cool down period in which the structure is hardened. Analyzing what’s going on during each phase would be next to impossible without the use of special instruments and techniques.

“Getting better performance out of the electrolyte can’t be done without first understanding what’s going on inside the structure. We need to understand what the mechanisms are that drive the synthesis process,” said materials scientist and lead author Yan Chen, a postdoctoral research associate at SNS. “VULCAN enables us to perform in situ experiments, visualizing the structure’s evolution in real time without disturbing the garnet synthesis process.”

With VULCAN’s help they monitored the low-conductivity phases’ formation during the thermal process, and found that it could be mitigated by doping the material—adding trace amounts of various elements that have high valences, or an affinity to create bonds, to reduce the effect. Being able to both suppress the formation of those unwanted phases and increase the number of useful vacancies for ion transport proved to be the key to unlocking garnets with high electrolytic performance.

“By tracking the lithium vacancies as functions of temperature and dopants, we found a common rule that the different dopants obey, and how they redistribute the vacancies in the framework of the garnets,” Chen said. “Furthermore, a comprehensive analysis of neutron diffraction results revealed how the dopants tune vacancy quantity, control vacancy distribution, and alter the charge carrier pathways in solid electrolytes.”

Thanks to the experiments by An and his team, materials researchers now have a proven method for achieving the best results in garnet structures—results that are sure to lead to safer materials with much needed savings of time and money.

“Now when people look at our work they can be guided how to make high ionic conductivity by choosing the right element with the right valence rather than repeatedly doing trial and error experiments on every single additional element—work that takes you a lot of time,” said An. “Now we can give you a simple formula to do it, and you should end up with a better material.”

This work was sponsored by DOE’s Office of Science.

UT-Battelle manages ORNL for the DOE’s Office of Science. The Office of Science is the single largest supporter of basic research in the physical sciences in the United States, and is working to address some of the most pressing challenges of our time. For more information, please visit http://science.energy.gov/.