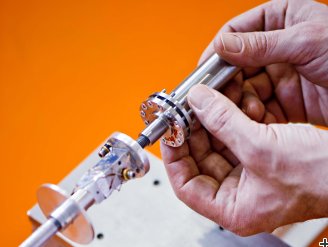 The mechanical and chemical properties of concrete depend significantly on the strength -giving calcium silicate hydrate (C-S-H). How the chemical reaction for this C-S-H works and the water is bound in it, however, is still not fully understood. Now researchers of the Centrum Baustoffe und Materialprüfung at the Technische Universität München (TUM) have obtained new insights into the bonding of water by using neutrons on the instrument TOFTOF of the MLZ.

The scientists studied the bonding of water in the first 36 hours of the reaction of tricalcium silicate and water. They measured within short periods of time with high neutron intensity and at the same high energy resolution on the flight spectrometer TOFTOF of TUM. For the first time, an increase in the proportion of physically bound water could be detected at the beginning of the reaction. The researchers explain this phenomenon with the formation of an early form of calcium silicate hydrate, which has a large specific surface area (800 square meters per gram). How much water is physically bound in the further process depends essentially on two factors: the formation of more early calcium silicate hydrate, which increases the overall surface and its reduction by polymerizing the C-S-H.

This knowledge allows a very precise structure determination and a detection of the formation kinetics of the strength- giving phases in concrete. This is the basis for a further concrete optimization, both economically as well as ecologically.
The work was funded by the German Research Foundation (DFG).