Neutrons Provide New Explanations for Side Effects of Ibuprofen 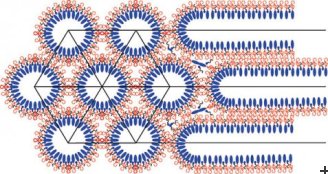 Ibuprofen lodging itself in lipid-layers Ibuprofen (represented by the small blue circles with black “tails”) lodges itself in layers of lipids (large blue ellipses with red tails). High concentrations lead to the formation of patterns made up of pores (left); at low concentrations, lipid bilayers can be found (right). © Forschungszentrum Jülich

Ibuprofen is an active substance often used in the treatment of pain, fever and inflammation. However, if taken over a long period of time, certain risks present themselves, such as dangerous gastric bleeding. How this rare side effect develops on a molecular level has not yet been explained. Using a model system, researchers from the Jülich Centre of Neutron Science and from the Ludwig-Maximilians-Universität München have now shown that high doses of Ibuprofen can change the structure of lipid membranes. These types of membranes form the walls of healthy cells; the structural changes observed would be toxic for cells.

The scientists were able to detect these structural changes using a model system of phospholipids from soy plants with the help of neutron scattering techniques at the Heinz Maier-Leibnitz Zentrum in Garching near Munich. At low concentrations of Ibuprofen, the lipids examined formed parallel bilayers, which is usual for the cytomembrane of healthy cells. At high concentrations however, the membranes exhibited an ordered structure made up of holes.

The concentrations studied are far in excess of the estimated levels in medical applications. Researchers find it conceivable that shortly after taking the medication, high concentrations may occur temporarily in certain places and – one might assume – this could be enough to cause tiny defects in the cell walls. Further studies should reveal whether this type of structural change can actually be observed in lipids of animal origin with complex structures.