Neutron spectroscopy has enabled an international team to unravel quantum entanglement in a dimer of complex molecular qubits. 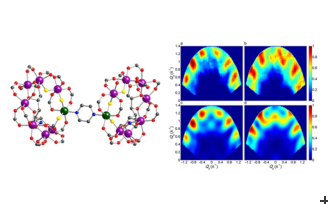 Molecular nanomagnets are inorganic compounds that consist of a metallic core surrounded by an organic ligand sheath, which acts to isolate each core leading to zero dimensional magnetic units – so-called ‘zero-point energy’ plays an important role in the stability of nanomagnets. These are of great technical interest for the magnetic storage of data, but so far have never been sufficiently stable1. Whilst these molecular nanomagnets are interesting for testing fundamental concepts in quantum mechanics, they are also promising candidates for a variety of interesting technological applications. One of the most exciting and challenging of which is quantum information processing.

Since the 1970s, the number of components in computer chips has doubled every one to two years, their size diminishing. This development has made the production of small, powerful computers such as smart phones possible for the first time. In the meantime, many components are only about as big as a virus and the miniaturisation process has slowed down. This is because below approximately a nanometre, a billionth of a meter in size, quantum effects come into play. They make it harder to stabilise magnetic moments. Researchers worldwide are looking for suitable materials for magnetically stable nanomagnets so that data can be stored safely in the smallest of spaces.2

The Cr7Ni antiferromagnetic ring is probably the most studied molecular qubit (a unit of quantum information). Indeed, its isolated ground spin doublet behaving as a single spin S = ½ (the spin state defining the qubit unit) can be used to encode a qubit and it has been proposed as a prototype for implementing quantum gates (the basis of quantum circuits) and quantum simulations. Molecular nanomagnets can also be magnetically linked in order to realise supramolecular structures. Arrays of weakly-coupled antiferromagnetic rings provide an ideal testbed for investigating entanglement between complex spin systems.

Entanglement is a crucial resource for quantum information processing and its detection and quantification is of paramount importance in many areas of current research. However, measuring entanglement in complex systems can be very difficult. So far, entanglement in supramolecular complexes of molecular nanomagnets has only been experimentally demonstrated rather indirectly by macroscopic techniques or by fitting trial model Hamiltonians to experimental data in a (Cr7Ni)2 dimer. This dimer consists of two Cr7Ni antiferromagnetic rings linked through a pyrazine unit leading to a weak inter-ring exchange interaction and thus to entanglement between the two molecular qubits.

In today’s Nature Communications publication, fruit of the collaboration between scientists of the Institut Laue-Langevin (ILL), the University of Parma, ISIS and the University of Manchester, the (Cr7Ni)2 dimer has been used as a benchmark system to demonstrate the capability of ‘four-dimensional’ inelastic neutron scattering to investigate entanglement between molecular qubits3. By utilising high-quality single crystals and the full capabilities of the time-of-flight spectrometer IN5, the team was able to demonstrate and quantify the entanglement through the huge amount of data they were able to extract from the 4D phase space (Qx,Qy,Qz,E), where Q is the momentum-transfer vector and E the energy transfer. Indeed, the neutron cross-section directly reflects dynamical correlations between individual atomic spins in the molecule. Hence, the corresponding pattern of maxima and minima in the measured neutron scattering intensity as a function of Q is a sort of portrayal of the entanglement between the molecular qubits. Furthermore, the team has also developed a method to quantify entanglement from INS data.
Such a measurement opens up remarkable perspectives in understanding entanglement in complex spin systems. “The research on molecular nanomagnets has been an attractive topic on the IN5 time-of-flight spectrometer since many years. In this recent work the top class chemistry and theoretical work meet the advanced neutron scattering methods to highlight the intricate physics of quantum entanglement, guiding further research towards a better understanding of the practical challenges in quantum information technology, said Dr Hannu Mutka and Dr Jacques Ollivier, ILL scientists.

With this benchmark measurement it looks as though neutrons will continue to be an essential tool in helping molecular nanomagnets realise their potential for quantum technologies of the future.