Usually, superconductors expel magnetic fields. In type II superconductors, however, thin channels – so-called flux tubes – are formed. The magnetic field is guided through these tubes while the rest of the material remains field-free and superconducting. In the metal niobium, the flux tubes bunch together into small islands that create complex patterns, which are common to other forms found in nature. A team of researchers from the Paul Scherrer Institute PSI and the Technische Universität München were the first to conduct neutron experiments to study these structures in niobium and determine the distribution of the islands in detail. The researchers hope their experimental approach will help understand the origins of such universal structures better. The results of their study were published in the journal Nature Communications. 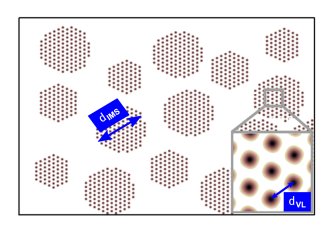 Researchers from the Paul Scherrer Institute (PSI) and the Technische Universität München (TUM) studied the arrangement and distribution of the flux tubes in the superconductive metal niobium and, for the first time, determined their arrangement and distribution deep inside the superconductor, as opposed to merely on the surface as done previously. In niobium, flux tubes behave in a special way: they are not necessarily evenly distributed in the material, but group together to form complex-shaped islands – called “vortex domains” by experts. Between the islands, there are areas without any flux tubes. This situation is known as an “intermediate mixed state”.

The researchers directly imaged the areas of the niobium sample where the flux-tube islands appear and showed how their structure changes with increasing magnetic field. At PSI’s neutron source SINQ and TUM’s research neutron source FRM-II, they used neutrons as a measuring probe in various experiments. They sent a beam of neutrons through the material and observed how the neutrons were deflected from their path. In the initial experiments, the researchers measured this deflection highly accurately, which enabled them to estimate the size of the islands and determine the arrangement of the flux tubes. The method used is known by the name “small-angle neutron scattering” as the neutrons are only slightly deflected here. However, the scientists were unable to ascertain whether the islands are distributed evenly across the entire material or concentrated in individual areas.

In order to render the distribution of the flux tubes visible, the researchers from PSI and TUM used a new method based on the principle of neutron grating interferometry. During the experiment, the neutrons are sent through several gratings, for example arrangements of fine strips that are alternately permeable and non-permeable for neutrons. An overlay pattern forms behind the lattices, which alternates between areas with many or few neutrons. By observing how the pattern changes when a sample is placed in the beam, the structures inside the sample can be deduced. “Grating interferometry enables us to study structures with a length-scale of a few micrometres – for example the size of the vortex islands”, explains Christian Grünzweig, who is responsible for the experiment at PSI, where he helped develop the grating interferometry technique. Thanks to this method, it was possible to determine the spatial distribution of the vortex islands, despite the fact that they are smaller than the detector’s individual pixels and therefore cannot normally be rendered visible. Surprisingly, it transpired that the islands initially start to form deep inside the sample, and not at the edges.

Islands as a model system

“In niobium, the flux tubes and the islands form typical structures and patterns, which appear in a similar way in many physical and chemical systems on a wide variety of length and time scales”, explains Tommy Reimann, a doctoral student at TUM and first author on the study. “These include magnetic domains, alloys in microstructures or chemical diffusion reactions. By changing the magnetic field or temperature, we can study the origins of such patterns in the ‘model system’ niobium in a unique way and draw very general conclusions about the formation of such patterns.” At the same time, as the authors stress, the experimental approach presented in this project is just the ticket for studying almost any system that develops structures on a micrometre scale.