More and more bacteria are becoming resistant to antibiotics. An example is the hydrolysis of the β-lactam ring in Penicillin and related antibiotics, thus making these drugs useless. 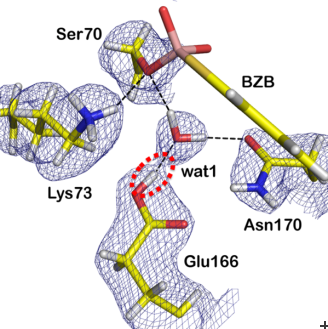 It is still not fully understood how the enzyme beta-lactamase in bacteria carries out this process. Some important details of the reaction mechanism are still controversial. However, the understanding of this mechanism could help develop new antibiotics. Leighton Coates and co-workers from the Oak Ridge National Laboratory, USA, have now studied in detail the mechanism of a β-lactamase enzyme using neutrons at the Forschungs-Neutronenquelle Heinz Maier-Leibnitz (FRM II). 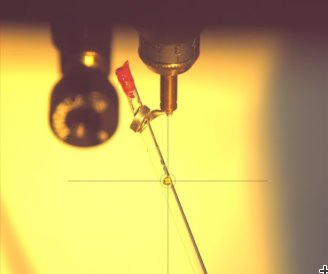 Enzyme crystal The enzyme crystal, which was examined at the instrument BioDiff in a capillar.

During the reaction in the active site, a proton acceptor temporarily takes a proton. So far there have been two conflicting hypotheses, which residue acts as the general base in part of the mechanism. Numerous studies have suggested it is the Lys-73 residue, while other studies suggested the Glu-166 residue. The neutron scattering experiments at BioDiff, complemented by high-resolution X-ray analysis, however, clearly showed that the Glu-166 acts as a proton acceptor.