Neutrons save cultural heritage from the Iron Age 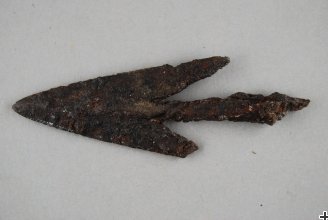 In Bavaria archaeologists are happy about numerous remains from the past, especially from the time of the Celts who inhabited Central Europe from the 8th to the 1st century before Christ. For good reason this period is called the “Iron Age” because many objects from major archaeological sites like that of Manching are made from this material. Much to the regret of archaeologists these finds often very quickly deteriorate after excavation in contact with the air. This is due to the chlorine content, which causes the iron artifacts from the past to rust very quickly in air, although they survived many centuries in the ground. The chloride ions are responsible for this accumulate from the surrounding soil during burial and form compounds with the iron surface.

To preserve the artifacts, this chlorine content must be reduced to a harmless level as quickly and as effectively as possible. The two methods used are: an extended storage in an alkaline solution or heating to high temperatures of up to about 700 ºC in an atmosphere of nitrogen and hydrogen.

The physicist Friedrich Wagner and the chemist Ursula Wagner from the TUM Physics Department have been working on this problem for quite some time together with Rupert Gebhard, Director of the State Archaeological Collection in Munich. In their latest publication they have examined the high temperature method more closely by the Prompt Gamma Activation Analysis (PGAA) method to find the optimal conditions for preservation. PGAA has the great advantage that the pieces can be examined non-destructively. They become only weakly radioactive and can thus be returned to the museum shortly after the experiments.

The subject of the studies was a 40 cm long iron rod from the Celtic oppidum in Manching, which was excavated already in 1999. As expected, they found the highest reduction of the chlorine content by 85% at 750 °C and the lowest one at 350 °C by 30%. Surprisingly they found relatively large differences in the individual studied pieces which could not immediately be explained.

Friedrich and Ursula Wagner have worked together with the Nobel laureate Rudolf Mössbauer at TUM and therefore they are experts in the field of Mössbauer spectroscopy, which is also a nondestructive method and can distinguish very accurately between divalent and trivalent iron and various iron oxides and hydroxides. Combined with X-ray diffraction they could get to the bottom of the thermally induced chemical transformations. At 750 °C, for example, a mixture of magnetite and wuestite with metallic iron is formed.

The authors of the new publication are not yet completely satisfied: “Our measurements raise new questions: So it remained unclear what causes large spread of the chlorine content very accurately measured by the PGAA method. We will go on to investigate this question.”