Neutrons shining light on the structure of silk-derived biomaterials 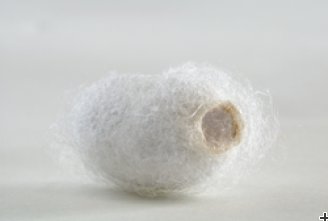 Silk may well be the oldest biomaterial humans have exploited. The fibres from the cocoon of the domestic silk moth’s caterpillar, as well as a number of other insects, have been used since 3000 BC to produce highly coveted, precious textiles. These were also used later on by the Greeks and Romans for sutures and wound dressings. The primary protein comprising silk is fibroin, and in the last century, it has been intensely studied for a variety of advanced applications beyond luxurious fabrics. Some of the most exciting current research is exploring the potential of this protein in a range of applications using neutrons. Research that is taking place at the Institut Laue-Langevin(ILL), the world’s flagship neutron science facility.

Fibroin is extracted from the cocoon of the Bombyx mori silkworm, which can produce a cocoon that unravels to form over 900 metres of silk thread, in just 48 hours. The protein is able to form a hydrogel, a natural polymer material that can be easily manipulated with scientific methods. Silk hydrogels are of particular interest for biomedical applications as they not only have extraordinary mechanical properties but also low immunogenicity, low bacteria adherence and inherent biodegradability.

One application of particular interest is the use of these hydrogels in wound dressings. Hydrogels feature a very moist environment with sufficient oxygen supply that helps the cells to regenerate and prevents bacteria growth due to the narrow mesh size, acting as a mechanical barrier for bacteria. Hydrogels can absorb and retain the wound extrudate, which promotes the proliferation of fibroblasts and the migration of keratinocytes. Hydrogels are furthermore non-adhesive and have cooling properties due to their high water content, which leads to increased pain relief, as well as increased comfort for the patient.

While basic hydrogels have been used for medical applications for over 60 years, advanced modification of hydrogels could provide therapeutic advantages such as sustained release of drugs to promote healing or antibiotic protection.

However, to open the doors to these promising applications the materials must be modified: not only to add function, but also improve the processability. Additives such as biosurfactants can be used, or substances that improve the durability, as proteins are naturally very sensitive to factors such as temperature and pH. Other compounds added can improve the mechanical properties, making it easier to handle. Surfactants, for example, aid the formation of the gel from the fibroin protein solution extracted from the silk – naturally the desired structure would take two weeks to form, but surfactants can shorten this time to two days.

Researchers have also looked into the possibilities of incorporating nanoparticles into the hydrogels to add a range of properties. Magnetic nanoparticles such as superparamagnetic iron oxide allow for manipulation of the composite material by an external stimulus. This can lead to changes in the structure of the hydrogel, for example changes in pore size to release a drug cargo where and when it matters. The characterisation of such complex multi-component systems can be challenging, but is necessary to understand and design materials that function.

Neutrons are an extremely valuable tool for looking at the structure of these composite biomaterials. Neutrons interact with matter via the atomic nucleus, which makes them sensitive to light elements such as hydrogen or carbon, which are the most abundant elements in biological systems and structures. When neutrons hit a sample, their subsequent scattering can reveal information about size, shape, structure and distribution of matter in the sample. Various instrument and sample environments are highly adaptable to a broad range of experiments and scientific problems. The different scattering length of hydrogen and deuterium (‘normal’ and ‘heavy’ water) is a specific feature in neutron scattering which allows scientists to examine different compounds in a material with contrast matching methods. For example, by varying the amount of deuterated water in the sample environment, the contrast of the imaging can be adjusted to ‘blank’ specific compounds, and support the characterisation of only one compound in the system while the other is invisible.

At ILL, a number of instruments and techniques are ideally suited to the study of biological material and sensitive organic structures like proteins. Small Angle Neutron Scattering (SANS) is suited to examining materials across sizes ranging from 1-100 nanometres. These include polymers, and biological macromolecules. Neutrons offer significant advantages compared to other probes. In particular, neutrons are less destructive than other forms of radiation, such as X-rays – they do not damage sensitive biological samples. The D11, D22 and D33 instruments are tailored to these techniques, providing a platform for world-leading materials research.

Hydrogels, such as those produced from silk fibroin, have immense potential in a range of scientific and medical fields – from cell culture mediums to tissue engineering – and have demonstrated great success in long-standing applications such as contact lenses. The instruments at ILL provide amongst the world’s best tools for examining the structural networks in these materials, and the expertise provided by the scientific staff and instrument scientists enables the highest experimental quality.