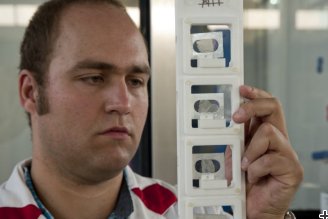 Experiments with neutrons at the Technische Universität München (TUM) show that the antidepressant lithium accumulates more strongly in white matter of the brain than in grey matter. This leads to the conclusion that it works differently from synthetic psychotropic drugs. The tissue samples were examined at the Research Neutron Source Heinz Maier-Leibnitz (FRM II) with the aim of developing a better understanding of the effects this substance has on the human psyche.

At present lithium is most popular for its use in rechargeable batteries. But for decades now, lithium has also been used to treat various psychological diseases such as depressions, manias and bipolar disorders. But, the exact biological mode of action in certain brain regions has hardly been understood. It is well known that lithium lightens moods and reduces aggression potential.

Because it is so hard to dose, doctors have been reluctant to prescribe this “universal drug”. Nonetheless, a number of international studies have shown that a higher natural lithium content in drinking water leads to a lower suicide rate in the general population. Lithium accumulates in the brains of untreated people, too. This means that lithium, which has so far been regarded as unimportant, could be an essential trace element for humans.

This is what Josef Lichtinger is studying in his doctoral thesis at the Chair for Hadron and Nuclear Physics (E12) at the Technische Universität München. From the Institute for Forensic Medicine at the Ludwig-Maximilians-Universität Munich (LMU) he received tissue samples taken from patients treated with lithium, untreated patients and healthy test persons. The physicist exposed these to a focused cold neutron beam of greatest intensity at the measuring station for prompt gamma activation analysis at FRM II.

Lithium reacts with neutrons in a very specific manner and decays to a helium and a tritium atom. Using a special detector developed by Josef Lichtinger, traces as low as 0.45 nanograms of lithium per gram of tissue can be measured. “It is impossible to make measurements as precise as those using the neutrons with any other method,” says Jutta Schöpfer, forensic scientist at the LMU in charge of several research projects on lithium distribution in the human body.

Lichtinger’s results are surprising: Only in the samples of a depressive patient treated with lithium did he observe a higher accumulation of lithium in the so-called white matter. This is the area in the brain where nerve tracts run. The lithium content in the neighboring grey matter was 3 to 4 times lower. Lithium accumulation in white matter was not observed in a number of untreated depressive patients. This points to the fact that lithium does not work in the space between nerve cells, like other psychotropic drugs, but within the nerve tracts themselves.

In a next step Josef Lichtinger plans to examine further tissue samples at TUM’s Research Neutron Source in order to confirm and expand his results. The goal is a space-resolved map showing lithium accumulation in the brain of a healthy and a depressive patient. This would allow the universal drug lithium to be prescribed for psychological disorders with greater precision and control. The project is funded by the German Research Foundation (DFG).