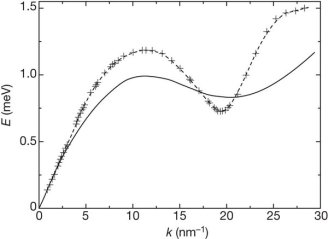 Scientists working at the Institut Laue-Langevin, the world’s flagship centre for neutron science, have carried out the first investigation of two-dimensional fermion liquids using neutron scattering, and discovered a new type of very short wave-length density wave. The team believe their discovery, published in Nature, will interest researchers looking at electronic systems, since high-temperature superconductivity could result from this type of density fluctuation.

Fermion liquids are composed of strongly interacting fermion particles, a group that includes quarks, electrons, protons and neutrons. They are common in nature and are found in atomic nuclei, metals, semiconductors and neutron stars.

They are also one of two types of quantum liquid used in a field known as ‘many-body physics’ to model and explain the complex interplay between atoms, and even sub-atomic particles, that is governed by quantum mechanics.

Fermion particles are defined by their adherence to the Pauli Exclusion Principle, which states that no two identical fermions can exist in the same energetic state, making fermion systems particularly complicated. As a result, whilst the other types of quantum liquid, composed of bosons such as gluons and photons, are well understood in terms of their underlying physics, fermion liquids remain more mysterious.

As part of this on-going investigation a team of researchers from the CNRS (Centre National de la Recherche Scientifique) in France, Aalto University in Finland, Oak Ridge National Laboratory and SUNY University at Buffalo in the US, and Johannes Kepler University in Austria carried out the first direct investigation of these very short wave-length elementary excitations in a fermion liquid by inelastic neutron scattering. In their study, funded in part by the MICROKELVIN collaboration, the neutrons were focused on a one atom-thick layer of helium-3, a much rarer version of helium on Earth than the helium-4 used in balloons and airships which acts like a Fermi liquid at temperatures close to absolute zero.

Using this scattering technique the scientists were able to observe high-frequency, very short wave-length density waves known as zero-sound mode oscillations. The results from the scattering experiments revealed the zero-sound modes to be far longer lived in this two-dimensional fluid than those seen in bulk liquids during previous experiments at the ILL, where they were strongly damped.

The discovery of these oscillations in a fermion helium liquid is particularly interesting as it is thought that if this type of high-frequency density oscillation were to be seen in another fermion liquid, composed of electrons, this could be a mechanism for high-temperature superconductivity. Once the team have completed their investigation of the properties of the helium system, their next step is to extend this understanding to electron liquids.

Dr. Henri Godfrin, Director of research at CNRS, based at the Institut Néel, a leading laboratory for fundamental research in condensed matter physics:
“People working with electron systems will be very interested to see if this property exists in their own systems and this finding suggests it is entirely possible. This is an important discovery in the field of quantum fluids which has direct consequences in other areas of many-body physics, for instance in understanding the makeup of metals and the physics behind neutron stars.”

The Institut Laue-Langevin (ILL) is an international research centre based in Grenoble, France. It has led the world in neutron-scattering science and technology for almost 40 years, since experiments began in 1972. ILL operates one of the most intense neutron sources in the world, feeding beams of neutrons to a suite of 40 high-performance instruments that are constantly upgraded. Each year 1,200 researchers from over 40 countries visit ILL to conduct research into condensed matter physics, chemistry, biology, nuclear physics, and materials science. The UK, along with France and Germany is an associate and major funder of the ILL.

The Centre National de la Recherche Scientifique (CNRS – National Center for Scientific Research) is a public research organization, under the authority of France’s Ministry of Higher Education and Research. As the largest fundamental research organization in Europe, CNRS carries out research in all scientific disciplines, through its ten thematic institutes. CNRS aims to:
• Generate scientific knowledge for the benefit of society
• Work hand in hand with industry and contribute to the enhancement and application of research results
• Disseminate scientific information
• Promote cutting-edge technology
• Support research training and reveal talents

3. The European Microkelvin Collaboration – MICROKELVIN – is an EU-funded Integrating Activity project carried out in the FP7 Capacities Specific Programme “Research Infrastructures”. It is a bottom-up approach of 12 partners to provide access to and develop applications of ultra-low temperature regime.