Magnetism. Over the last 60 years neutron scattering has provided the breakthroughs necessary to understand the atomic-level ordering of magnetic materials. The latest discovery of these ‘hidden orders’ has recently been published in the journal Science and suggests the potential for neutron scattering to reveal much more. 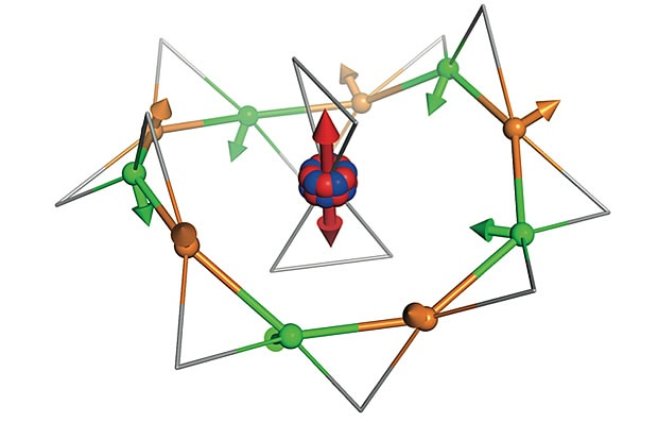 One of the great triumphs of 20th century physics was to explain macroscopic changes observed in bulk measurements of materials, such as heat capacity, in terms of the microscopic ordering of atoms, electrons and their magnetic properties. An equivalent mystery today is moving beyond theory to uncover microscopic evidence for hidden-order states in frustrated magnetic materials.

Contributing to this search is a new study that has used neutron scattering data and reverse Monte Carlo calculations to produce an atomic-scale model of a gadolinium gallium garnet (Gd3Ga5O12), or GGG, powder sample. The breakthrough research was published in the journal Science this month by a collaboration of researchers representing the European Spallation Source (ESS) in Sweden, the ISIS neutron source in the UK, the Institut Laue-Langevin (ILL) in France, the University of Copenhagen in Denmark, the Georgia Institute of Technology in USA, and the British universities of Oxford, Cambridge and Warwick.

“We recently showed that correlated looped structures exist for magnetic ions that are positioned on a hyperkagome lattice,” explained Pascale Deen, ESS instrument scientist for direct geometry spectroscopy, who, together with Professor Andrew Goodwin from Oxford University, led the research. “Magnetic anisotropy leads to a further exotic behaviour—a novel multipolar hidden order that is ‘hidden’ at the Angstrom scale but correlated across longer distances. This situation is very much reminiscent of nematic ordering in molecular structures.” 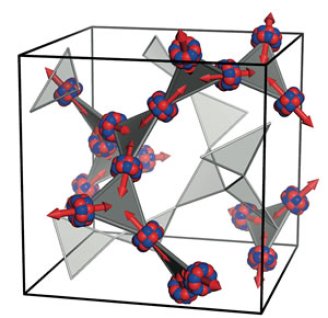 The GGG scale model, which addressed both bulk macroscopic and microscopic experimental features, was based on neutron scattering data collected on the hot-neutron, four-circle diffractometer D9 at ILL. The model reflected two observations that signalled the development of the long-range hidden-order state: an observable broad specific-heat anomaly, which is an atypical indicator of phase transition, and evidence that looped structures, known as decagons, were present on the lattice.

Until 1940, macroscopic bulk measurements were used to show the existence of magnetic phase transitions—implying internal atomic restructuring—that could not be identified via direct measurement of microscopic properties. Neutron scattering techniques developed during the 1950s finally yielded the spatial information necessary to prove the existence of magnetic orders such as antiferromagnetism.

Today, there are many materials for which there is weak evidence of macroscopic reordering, yet no microscopic explanation can be found. In GGG, the magnetic gadolinium ions sit on a complex triangular lattice known as a hyperkagome. This compound has perplexed condensed matter physicists for decades, principally because no signature of magnetic order had been observed down to 25 milli-Kelvin.

What Deen, Goodwin, and their team have demonstrated is that weak features in the bulk measurements are consistent with long-range magnetic order. This is derived from an emergent ordering of ten ions on the decagons. The resultant magnetic order of each decagon loop, a spin director, was determined to be highly structured and correlated between the decagon loops.

“Only via neutron scattering, due to the interaction of the neutron spin with the magnetism in the sample, is it possible to extract the scattering pattern of this novel order,” says Deen. “The neutron experiment itself is extremely difficult due to the large absorption cross section for gadolinium in the hyperkagome GGG sample, and so the sample scatters very weakly. The hidden order in GGG has properties that are fundamentally different from current known magnetic phenomena. We believe these effects to be rather common in frustrated magnetic materials and so will provide great insight into magnetic order.”

The study results indicate that neutron scattering techniques hold considerable potential for the illumination of other hidden-order states such as quantum spin nematics in high-temperature superconductors, and chiral spin liquids in frustrated magnetic materials.