Neutrons unlock the secrets of limoncello 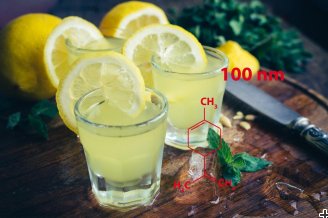 Neutrons unlock the secrets of limoncello

If you’re looking for a liquid to study with neutron scattering, lemon liqueur probably isn’t your first thought. But, for Dr. Leonardo Chiappisi, a researcher at the Institut Laue-Langevin (ILL, France) and the Technical University of Berlin (TU Berlin), it was an obvious choice. “I’m originally from Sicily,” he jokes, “and limoncello is the best thing to help liven up a dinner.”

Limoncello, a cloudy neon-yellow liqueur, is common across southern Italy. People often make it themselves by leaving lemon zest to mature in alcohol for several weeks. It’s also a personal favourite of Dr. Chiappisi and the inspiration for a paper that he hopes will help develop new speciality chemicals – especially eco-friendly products using citrus oils.

Limoncello is among a group of liqueurs that experience the so-called “ouzo effect”, named after ouzo, an anise-flavoured aperitif. Ouzo is normally a clear liqueur, but it turns milky and opaque when water is added, and can stay like that for a long time.

The reason is down to its mix of alcohol, oil and water, and it’s this mixture that interests scientists – including Dr Chiappisi and his co-author, Dr Isabelle Grillo. Usually oil and water repel each other, and have to be forced to mix by adding a detergent or similar surfactant. In ouzo and similar liqueurs, however, the alcohol keeps the oil and water together unless more water is added.

It’s this property of keeping water-repelling chemicals in an emulsion with water that interests the speciality chemicals industry. “There’s been an interest in describing the properties of these detergent-free solutions since 2010 because there’s no need to add a surfactant, which can be hard to remove afterwards,” says Dr. Chiappisi. Studying limoncello, in particular, could help the growing industry in citrus oils for green solvents, environmentally-friendly plastics and insect repellent.

Good quality limoncello is always cloudy. In fact, Dr Chiappisi wouldn’t consider drinking a non-opaque one and this cloudiness remains for the life of the bottle. People have previously studied the chemical composition of limoncello, but Dr Chiappisi’s experiment, published in ACS Omega, is the first to look at the physical composition at the microscopic scale. He discovered that limoncello is formed of tiny oil droplets, around 100 nanometres in radius suspended in an alcohol-water mix.

The physical structure of foods is known to affect their flavour, appearance and shelf life, but it’s often hard to study at the microscopic scale. To look for these tiny droplets, Dr. Chiappisi aimed a neutron beam at samples of limoncello. “The neutron beam leaves the sample at a different angle, and this allows us to reconstruct what the structure looks like,” he says.

Dr. Chiappisi chose to use neutron scattering as it’s one of a few techniques capable of looking at the structure of soft materials, such as limoncello, at a length scale of 1 to 100s of nanometres. Neutron scattering is very sensitive to the number of neutrons in a molecule. While the lemon oil was naturally rich in hydrogen, which has no neutrons, the team enriched the water and ethanol with deuterium – an isotope of hydrogen with an extra neutron.

Limoncello is served in chilled glasses and should be drunk slowly so it often has time to warm up. To find out whether the physical properties change as the temperature rises, Dr. Chiappisi varied the temperature at which he measured neutron scattering. He also altered the amounts of sugar and water in his limoncello.

Working out the amount of essential oils in his homemade limoncello was easier. He resorted to a commonly-used technique called proton nuclear magnetic resonance to measure the oil content at a molecular level. “I wanted to see how much lemon oil was extracted from the lemons,” he explains.

To his surprise, neither sugar content nor temperature affected the appearance of limoncello at a microscope scale. However, varying the oil and water content did change how much oil was dissolved in the alcohol-water mix rather than locked up in droplets. When the water content was ~50%, similar to a high-quality shop-bought limoncello, only two thirds of the oil was locked up in droplets. The rest was free to be released as a lemon scent, adding to the appeal of the drink.

Dr Chiappisi hasn’t yet solved the question of how alcohol creates these tiny droplets; as he says “that will probably take many more years and the contributions of other researchers”. Some computer simulations suggest that oil droplets enriched with alcohol have a flexible surface, allowing them to ‘wobble’ in water. “But this is just a hypothesis,” he explains.

In the meantime, Dr Chiappisi hopes his study will help with the development of surfactant-free emulsions for different applications, from industrial catalysts to using natural essential oils as speciality chemicals.