Thanks to NMI3 support, for the first time researchers create artificial methane hydrates in just a few minutes. 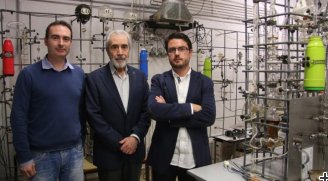 Methane hydrates are the Earth’s largest natural gas reserve, but they are formed under very specific physical, chemical and geological conditions that can only be found in the bottom of the oceans, or, less frequently, in the subsoil of cold regions such as Siberia, known as permafrost.

Now for the first time, researchers from the University of Alicante in Spain, in collaboration with the ITQ Institute of Valencia in Spain and the Shinshu University in Japan, have developed a technology to prepare artificial methane hydrates in just a few minutes. The team was successful to prepare methane hydrates in a laboratory by imitating, and even enhancing, natural processes through the use of activated coal materials as nano-reactors.

Methane hydrates have been prepared on activated coal materials that were previously wetted under pressure and temperature conditions (30 atmospheres and 2ºC) gentler than the ones found in natural environments. The team took advantage of the so-called “confinement” effect to artificially synthesise methane hydrates inside the coal’s pores. They then conducted inelastic neutron scattering (INS) experiments at the ISIS Neutron Source in the UK, benefiting from NMI3 support. INS is a perfect technique for this experiment as it makes it possible to observe the self-dynamics of molecular hydrogen. Complementary experiments were conducted at the ALBA synchrotron in Spain.

While in nature the process to form methane hydrates takes a long time, the team made it in just a few minutes, thus making its technological applicability much easier. These results are a step forward to understanding the artificial synthesis process of these natural structures, and a new pathway into the use of e.g. natural gas as fuel for transport, or for long-distance transport of natural gas at temperatures close to room temperature.

Thanks to Joaquín Silvestre-Albero for reviewing this article.

Joaquín Silvestre-Albero and Mirian E. Casco from the University of Alicante have received NMI3 support to conduct experiments at ISIS.