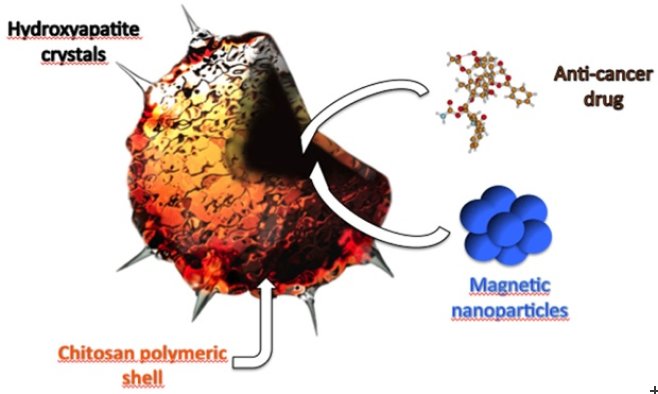 Bio-NCP scheme Representative scheme of the bio-NCP, where the magnetic nanoparticles and the anti-cancer drug are encapsulated into a chitosan polymeric shell whose surface is modified by crystalline hydroxyapatite. Image: Martins et. al.

COPENHAGEN — The battle to treat breast cancer—the most common cancer type for women globally—has spurred development of a new kind of drug delivery system for bone tumours associated with the disease. The system is based on bio-nanocomposites (bio-NCP), and is being developed through a collaboration of scientists from the Niels Bohr Institute (NBI) at Copenhagen University in Denmark, Universidade Estadual Paulista (UNESP) in Brazil, Helmholtz–Zentrum Berlin (HZB) in Germany, the ISIS neutron source and the University of Oxford in the UK, and the European Spallation Source (ESS) in Sweden.

Previous studies have shown breast cancer cells migrate toward bone tissue due to the cells’ affinity for hydroxyapatite (HAP) [Ca10(PO4)6(OH)2], a primary mineral component of bone. Curiously, when reduced to the nanoscale, HAP is also a known inhibitor of cancer cell proliferation. Using this knowledge, the researchers designed a new bio-NCP drug carrier, which consists of an anti-cancer drug encapsulated in a polymeric nanosphere with a surface modified with HAP crystals. The crystals direct the carrier to the bone tissue and bind it selectively to cancer cells. 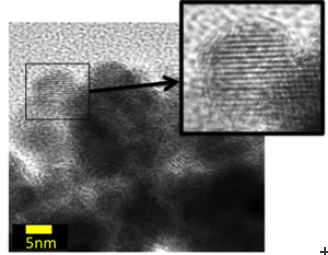 “The aim is to deliver the drug to the cancer cells in a selective and effective way with reduced pharmacological side effects,” says Murillo Longo Martins, the post-doc at NBI who led the study. “Magnetic nanoparticles were also included in the material, which allow us, for example, to track the position of the bio-NCP inside the body using magnetic resonance imaging.”

To decipher the chemical, physical and biological properties of the bio-NCP material and determine its effects on breast cancer cells, several state-of-the-art techniques were used, including thermal analysis, infrared spectroscopy, microscopy, preliminary biological tests, X-ray diffraction and neutron scattering. Neutron data was obtained with the FOCUS direct geometry spectrometer at the Paul Scherrer Institute (PSI) in Switzerland, the IN4 thermal neutron spectrometer at Institute Laue Langevin (ILL) in France, the FDS spectrometer at Los Alamos National Laboratory (LANL) in the US, and the POLARIS diffractometer at ISIS.

“The neutron powder diffraction data has shown how different chemical elements are distributed within the structure of the magnetic nanoparticles, which form the core of the bio-NCP. Neutron spectroscopy—inelastic and quasielastic—was used to study the molecular dynamics of an anti-cancer drug encapsulated into the bio-NCP,” says Heloisa Bordallo, who supervised Murillo at NBI, where she is an associate professor of X-ray and neutron science. Bordallo also serves as an advisor to the Scientific Activities Division at ESS. “The dynamical changes on this encapsulated molecule are currently being related to the biological properties of the bio-NCP against healthy and cancer cells.”

From a societal standpoint, development of the new bio-NCP holds promise to improve the efficacy and reduce the side effects of cancer drugs administered to patients.