The way that algae and plants respond to light has been reinterpreted based on results from experiments studying real-time structural changes in green algae. Under particular lighting conditions during photosynthesis, the well-ordered stacking and alignment of light-sensitive membranes in the algae are disrupted. There is no significant movement of the membrane embedded light harvesting proteins, which rather become largely inactive. These new findings challenge widely accepted views of how algae respond to light where the light harvesting proteins were thought to move around the membranes. The new results from researchers at the Paul Scherrer Institut (PSI) and colleagues in Japan, France and Hungary are published in the Proceedings of the National Academy of Sciences and a number of related articles. 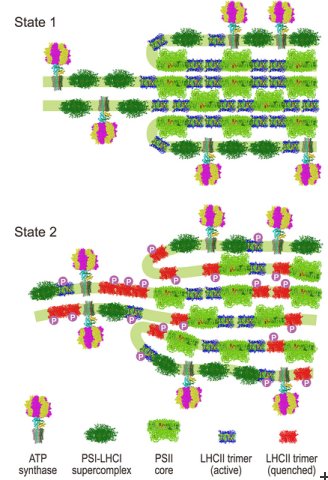 Photosynthesis is the process used by plants, algae and cyanobacteria to convert sunlight into chemical energy that can be stored and later released to fuel cellular activity. This chemical energy is stored in carbohydrate molecules, such as sugars, that are made from carbon dioxide and water, with oxygen released as a waste product. Photosynthesis maintains atmospheric oxygen levels and supplies virtually all of the organic compounds and energy necessary for life on Earth.

«Plants have to operate in very different environments and lighting conditions,» says Gergely Nagy at the Laboratory for Neutron Scattering, Paul Scherrer Institute, first author of the PNAS study. «They have to react to the changing colours of light and manage the different illumination of their leaves from the top to the bottom of a plant. The same is true for algae in water at different depths in the sea or lakes.»

The conversion of light energy to chemical energy in the two photosystems is balanced by a sophisticated regulatory mechanism called state transitions. Although the core idea of state transitions has been established since 1969, in-depth understanding of this complex process and the accompanying structural changes has only recently advanced.

«Our data have allowed us to propose a general model for state transitions in algae that explains the molecular mechanism and physiological consequences, and clarify the nature of accompanying structural changes,» says Nagy. «We found that state transitions change the stacking and periodicity of the thylakoid membranes and altered the protein–protein interactions within these membranes.»

These structural changes accompany the conversion of one of the light-harvesting proteins (LHCII) into an inactive, energy-dissipating mode with only minor movement of the LHCII light harvesting proteins within the membrane. «This new finding differs from previous ideas where it was thought that different amounts of the LHCII proteins – up to 80% in some microalgae – would move between the two photosystems in the membrane during state transitions,» says Nagy.

Neutron scattering is a technique well-suited for studying biological samples. It is non-destructive, and there is no need to stain a sample, or fix with chemicals or low-temperatures. Living cells under natural conditions are illuminated with a beam of neutrons and data from the scattered beam can be used to calculate structural information in the sample in the nanometre to micrometre range.

«Neutron experiments are extremely well-suited to provide accurate structural information on the membrane ultrastructure,» says Nagy. «The state transitions deeply affect the organisation of light-sensitive thylakoid membranes in the chloroplast of the algae. Neutron experiments give a unique perspective where we can watch the state transitions as they are happening. This is the first time that ultrastructure changes have been clearly identified with the aid of neutrons.»

The neutron scattering experiments were carried out at the Institut Laue-Langevin neutron source in France and the Swiss SINQ neutron source at the Paul Scherrer Institut.

The Paul Scherrer Institute PSI develops, builds and operates large, complex research facilities and makes them available to the national and international research community. The institute’s own key research priorities are in the fields of matter and materials, energy and environment and human health. PSI is committed to the training of future generations. Therefore about one quarter of our staff are post-docs, post-graduates or apprentices. Altogether PSI employs 1900 people, thus being the largest research institute in Switzerland. The annual budget amounts to approximately CHF 350 million.

Nagy, G., Garab, G. and Pieper, J.
Neutron Scattering in Photosynthesis Research in Photosynthesis: open questions and what we know today.
S. I. Allakhverdiev, A. B. Rubin et V. A. Shuvalov, Izhevsk Institute of Computer Science (2014)