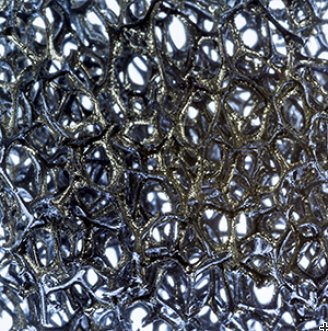 Scientist Christopher Lavelle of the Johns Hopkins University Applied Physics Laboratory, together with a team of researchers from the University of Maryland and the National Institute of Standards and Technology, has successfully shown that boron-coated vitreous carbon foam can be used in the detection of neutrons emitted by radioactive materials — of critical importance to homeland security. Lavelle is lead author of the paper “Demonstration of Neutron Detection Utilizing Open Cell Foam and Noble Gas Scintillation” released today in the journal Applied Physics Letters.

Detecting neutrons is key to counterterrorism activities, such as screening cargo containers, as well as other vital applications in nuclear power instrumentation, workplace safety and industry. The demand for detectors has risen dramatically over the past decade while at the same time the usual detection material, helium-3, has become harder to obtain. An advantage of the approach outlined in the paper is that boron is abundant and relatively low cost compared to helium-3. The use of a coated foam, in particular, disperses the boron evenly throughout the detector volume, increasing efficiency by filling in otherwise empty space.

Lavelle and his colleagues’ work builds on a series of experiments conducted with scientists at NIST and the University of Maryland that had demonstrated that a process called noble gas scintillation can be controlled and characterized precisely enough to detect the neutrons emitted by radioactive materials. Scintillation refers to a process where energetic particles produce flashes of light when passing through certain materials, in this case xenon gas. Sensitive light detectors record the rate at which these light flashes occur to measure the presence and intensity of neutrons in the environment.

In a follow-on experiment, the research team obtained samples of “carbon foam” coated with boron carbide and placed them in xenon gas. The boron-10 isotope in the coating readily absorbs neutrons. Following neutron absorption, energetic particles are released into the gas and create flashes of light. In this experiment, researchers determined that neutrons captured deep within the coated foam produce large enough flashes to be detected by light detectors outside the foam. Previously, there had been some doubt as to whether the light flashes would actually escape foam, or if the foam would completely shadow them from the light detector.

The next steps in the series of experiments include investigating other unique detector geometries, such as multiple layers of boron-coated thin films, the use of optically transparent neutron absorbers, and finalizing a design for a potential prototype detector.

The Applied Physics Laboratory, a not-for-profit division of The Johns Hopkins University, meets critical national challenges through the innovative application of science and technology.
For more information, visit www.jhuapl.edu