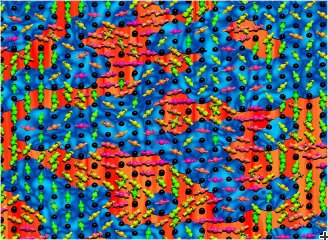 Charge distribution in cobalt oxide Charge distribution with nanostructure: In a cobalt oxide crystal Max Planck researchers found in the nanometer range two different zones, which are rich (blue) of charge carriers respectively poor (red). At the same time, they investigated with neutrons at the instrument PUMA the magnetic correlations in this material. The arrows and colors reflect the orientations of the electron spin or magnetic moments of the individual atoms. © Dr. Alexander Komarek, Max Planck Institute for Chemical Physics of Solids

In collaboration with Dr. Oleg Sobolev, scientist at the triple-axis spectrometer PUMA at MLZ, a series of interesting measurements on insulators with a magnetic excitation spectrum that is typical for high temperature superconductors were generated, which are published in Nature Communications these days. The researchers led by Dr. Alexander Komarek from the Max Planck Institute for Chemical Physics of Solids (Dresden) studied a cobalt oxide crystal, showing an excitation spectrum that previously was only observed in superconducting cuprates (copper compounds).

The scientists used both neutron scattering and X-ray diffraction to explain an observed phenomenon, for which there are several competing explanations. Cobaltates as well as cuprates consist of layers in which the charge carriers, in this case due to lack of electrons positively “charged” holes, reside. In general a stripe-shaped arrangement of charges was expected. But, now a nanoscopic structure of charge-free islands surrounded by the positive charge carriers was found by the scientists. The magnetic excitation spectrum that they could gain from the neutron scattering resembles an hourglass shape and consists of a high-energy (upper) part and a low-energy (lower) part. This form correlated with the observed distribution of charge carriers: The energy-rich upper part of the hourglass reflects the magnetic excitations of the charge-free islands, the lower one especially the charge-rich regions in between. Komarek and his colleagues developed from their results a new model to explain this “nanophase separation”.

Apparently, the couplings between the magnetic atoms differ greatly in the two areas: On the charge-free islands they are stronger, so there is more energy needed for the magnetic excitation. The researchers also found in the neutron measurements at ILL, MLZ and LLB an additional magnetic excitation with a particularly high energy that had never been observed, but under the new model should actually be present. With their measurement results and the new model the scientists could deliver new knowledge that could be important for the understanding of high-temperature superconductivity’s understanding.