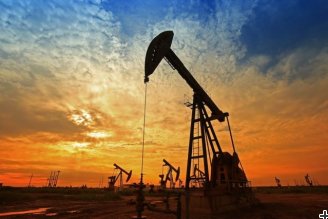 New tools could improve the way cement seals oil wells Oil and natural gas wells require concrete to seal the area between the well casing and the surrounding borehole, but because of the high temperatures and pressures at depth, it has been hard to study how these specialized cements harden. Now, a new method developed at MIT can help to fill in that missing knowledge. Credit: MIT

Techniques for observing concrete as it sets could facilitate the development of new cements.

A key part of drilling and tapping new oil wells is the use of specialized cements to line the borehole and prevent collapse and leakage of the hole. To keep these cements from hardening too quickly before they penetrate to the deepest levels of the well, they are mixed with chemicals called retarders that slow down the setting process.

It’s been hard to study the way these retarders work, however, because the process happens at extreme pressures and temperatures that are hard to reproduce at the surface.

Now, researchers at MIT and elsewhere have developed new techniques for observing the setting process in microscopic detail, an advance that they say could lead to the development of new formulations specifically designed for the conditions of a given well location. This could go a long way toward addressing the problems of methane leakage and well collapse that can occur with today’s formulations.

Their findings appear in the journal Cement and Concrete Research, in a paper by MIT Professor Oral Buyukozturk, MIT research scientist Kunal Kupwade-Patil, and eight others at the Aramco Research Center in Texas and at Oak Ridge National Laboratory (ORNL) in Tennessee.

“There are hundreds of different mixtures” of cement currently in use, says Buyukozturk, who is the George Macomber Professor of Civil and Environmental Engineering at MIT. The new methods developed by this team for observing how these different formulations behave during the setting process “open a new environment for research and innovation” in developing these specialized cements, he says.

The cement used to seal the lining of oil wells often has to set hundreds or even thousands of meters below the surface, under extreme conditions and in the presence of various corrosive chemicals. Studies of retarders have typically been done by removing samples of the cured cement from a well for testing in the lab, but such tests do not reveal the details of the sequence of chemical changes taking place during the curing process.

The new method uses a unique detector setup at Oak Ridge National Laboratory called the Nanoscale Ordered Materials Diffractometer, or NOMAD, which is used to carry out a process called Neutron Pair Distribution Function analysis, or PDF. This technique can examine in situ the distribution of pairs of atoms in the material that mimic realistic conditions that are encountered in a real oil well at depth.

“NOMAD is perfectly suited to study complex structural problems such as understanding hydration in concrete, because of its high flux and the sensitivity of neutrons to light elements such as hydrogen,” says Thomas Proffen of ORNL, a co-author of the paper.

The experiments revealed that the primary mechanism at work in widely used retarder materials is the depletion of calcium ions, a key component in the hardening process, within the setting cement. With fewer calcium ions present, the solidifying process is dramatically slowed down. This knowledge should help experimenters to identify different chemical additives that can produce this same effect.

When oil wells are drilled, the next step is to insert a steel casing to protect the integrity of the borehole, preventing loose material from collapsing into the well and causing blockages. These casings also prevent the oil and gas, which is under high pressure, from escaping out into the surrounding rock and soil and migrating to the surface, where leakage of methane can play a significant role in contributing to climate change. But there is always a space, which ranges up to a few inches, between the casing and the borehole. This space must be fully filled with cement slurry to prevent leakage and protect the steel lining from exposure to water and corrosive chemicals that could cause it to fail.

Methane is a much stronger greenhouse gas than carbon dioxide, so limiting its escape is a crucial step toward limiting the contribution of oil and gas wells to global warming.

“The methane, water, and all sorts of different chemicals down there [in the well] create a corrosion problem,” Buyukozturk says. “Also, the well bore circumferential area is next to parts of the Earth’s crust that have instabilities, so material could tumble into the hole and damage the casing.” The way to prevent these instabilities is to pump cement through the casing into the area between the well bore and the casing, which provides “zonal isolation.” The cement then provides a hydraulic seal to keep any water and other fluids away from the casing.

But the high temperatures and pressures found at depth present an environment that is “the worst thing you can do to a material,” he says, so it is crucial to understand just how the material and its chemical properties are affected by these harsh surroundings as they do their job of sealing the well.

This new method of studying the setting process provides a way “to precisely understand this process, so we can engineer the next generation of retardants,” says Kupwade-Patil, lead author of this paper. “These retardants are very important,” not only for protecting the environment but also for preventing serious economic losses from a damaged or leaking well. “Loss of the seal is serious, so you can’t afford to make a mistake” in the cement sealing process, he says.

“After obtaining my PhD, about 30 years ago, my first job was to improve the quality of oil-well cementing,” says Paulo Monteiro, the Roy W. Carlson Distinguished Professor of Civil and Environmental Engineering at the University of California at Berkeley, who was not involved in this work. “At that time there were limited sophisticated characterization techniques, so it is a real pleasure to see X-ray and neutron total scattering methods being applied to study the hydration of oil-well cements in the presence of chemical admixtures.” He adds that these new methods have “the potential to guide the development of tailor-made admixtures that can significantly improve the performance of oil-well cementing.”