Started already within FP6, the Neutron scattering and Muon spectroscopy Integrated Infrastructure Initiative (NMI3) joins European activities of large scale facilities and research institutes in these fields. Today, 18 partners in 12 countries provide scientists access to nationally funded neutron and muon sources in Europe. The FRM II is one of the most frequented sources and provides more than 350 days of beam time yearly for this project. NMI3 consists of three columns: the access program, the joint research activities (JRA), and networking including management. The JRA part aims to develop methods and components to improve the service and research opportunities for its users. The NMI3-I project ended in January 2013 and this overview focuses on the MLZ contributions, which are divided in several work packages starting with 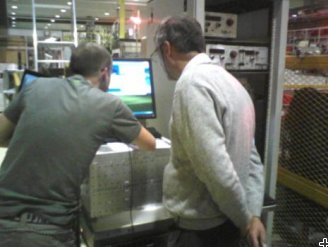 Detectors
Present state of the art detectors are based on either the electrical charge generated or the emitted light from the absorption process. Based on the gaseous scintillation proportional counters scientists from the FRM II participate on the developed a new family of detectors. The main challenges are investigating a new detection process, developing adequate readout electronics, and demonstrating the feasibility of this detector within a 20 × 20 cm² active area. Our detector group has built three identical small-sized GSPC chambers and distributed them to FZ Jülich and ISIS. They studied different light readout schemes and the possible use of a modern GPU as NVIDIA GeForce GTX570 for an online reconstruction algorithm. The comparison of simulated data with experimental data is promising: “Our technology could enable the design of neutron counting detectors with superior performance that exhibit a high count rate capability of up to 10 MHz, a high spatial resolution (~1 mm) and low gamma sensitivity on a par with gaseous detectors” says project leader Karl Zeitelhack (FRM II). The Monte Carlo Simulation package ANTs allows to optimize the detector design and to predict and understand its performance as well as to analyze the experimental data of a GSPC with elaborate algorithms. 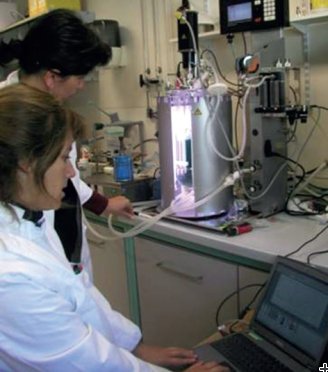 Deuteration
A new method of deuteration, developed at the TUM, now allows contrast matching studies on a far wider range of sample systems. The scientists developed a guideline and recommendation for all neutron researchers and established two model systems for implementing and optimizing protein ligation techniques. They subsequently demonstrated the expression of fragments and the ligation using protein trans-splicing techniques. The purified protein was used for SANS measurements with contrast variations at Institut Laue-Langevin (ILL) Grenoble to document the use of segmental deuteration. This result will extend the range of tackled problems and reduce the cost of sample preparation. The NMR community also increasingly uses neutron scattering and urgently needs isotope labelling.

Neutron Optics
The work at MLZ was focussed on two main objectives: High flux reflectometry and Small-Angle Neutron Scattering (SANS), focusing cold neutrons included. Recently researchers succeeded in implementing high performance supermirrors into optical devices: trumpet guides, ballistic guides, polarizing benders etc. and thus improving existing spectrometers. Advanced numerical simulations and upgraded Monte Carlo programs were necessary to improve the refractive and focusing optics and to adjust them precisely for example to be used in connection with extreme sample environments. The developing scientists integrated their new and better lenses and elliptic neutron guides in the KWS1 and the TOFTOF instrument at the MLZ, respectively. They built and tested two prototypes of full scale, adjustable focusing devices and the results completely agree with the numerical simulations. Frederic Ott (LLB/CEA) summarizes: “We could demonstrate several proofs of concepts and built a more advanced 2D focussing device for the TOFTOF at FRM II with much better characteristics and four piezomotors with holders to tune the mirror´s curvature. On the TOFTOF instrument, this device allows changing the curvature of the supermirrors in order to keep the focal point at the sample position.” 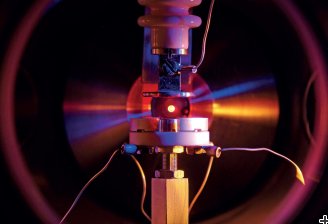 Sample environment
Some time ago the German Aerospace Centre (DLR) developed an automatic control system for liquid samples in a high temperature environment. This technique was not optimized to be used for neutron scattering experiments, for example at the TOFTOF-instrument at the FRM II. The main challenge was to adapt the electrostatic furnace to the spatial constraints given by a neutron scattering instrument. The system also needed an upgrade to levitate larger samples required for the neutron experiments. Together with the DLR, the team constructed and tested a containerless furnace and used it for neutron scattering experiments on beamlines at both the FRM II and ILL. Team leader Jürgen Peters (FRM II) summarizes: “The system fulfills all specifications, it is compact, can be loaded from above and can be moved from one instrument to another.” The additional laser pre-heating stage removes unwanted organic material from the surface of the sample as well as dissolved gases and other contamination off the bulk material. This results in a more reliable and faster melting process and aids the processing of new sample systems. 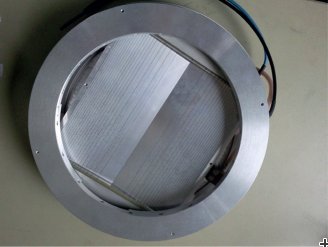 Polarized Neutrons
Condensed matter research depends on highly efficient neutron diffraction and spectroscopy techniques, so an easily accessible wide-angle polarisation analysis technique with higher energy and momentum resolution was an urgent wish. The team of Alexander Ioffe (JCNS) could develop a new design and produce a complete set of the so called “Pythagoras-coils”, which are large solid angle coils, for the spin-echo spectrometer J-NSE at the MLZ. Therefore they further improve the resolution and the transmission of neutron-spin echo spectrometers. Moreover the FRM II team also participated in the further development of the MIEZE technique, which widens the range of accessible samples up to highly depolarizing samples as ferromagnets.

Despite the fact that the researchers had to get over a painful shortened budget this first funding period within the FP7 was very successful. The scientists of the NMI3 project therefore could convince the EU to give extra money for the second project in FP7. Thanks to this, research on neutron scattering and muon spectroscopy goes on!
For further and more detailed information have a look on http://nmi3.eu/!