No dark side to neutron decay 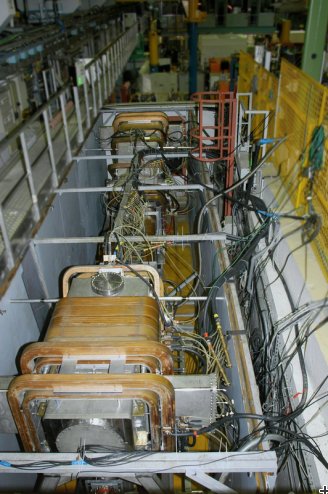 No dark side to neutron decay The PERKEO III spectrometer installed at the cold neutron beam facility PF1B.

Last year, scientists became rather excited when they thought they might have found evidence for the production of dark matter particles from experiments measuring the lifetime of the neutron – one of the two constituents of the atomic nucleus (the other is the proton). The neutron is generally stable when bound in atomic nuclei, but in the free state it lasts for just under 15 minutes. Two different kinds of neutron experiments had come up with considerably different lifetimes, and researchers thought that the anomaly might be due to the decay to a dark matter particle contributing to one type of experiment but not to the other.

The main mode of neutron decay is via so-called beta decay in which a neutron converts into a proton, an electron (beta particle) and an antineutrino. However, a neutron might also decay via other modes, for example, into exotic dark matter particles. The concept of dark matter is important in understanding the nature of the Universe and of matter. Cosmologists believe that the Universe is largely made up of invisible dark matter whose presence is uncovered through its gravitational effects, while particle physicists think that proving the existence of such exotic particles could help complete our description of the building blocks of Nature. It is thought that dark matter interacts with ordinary matter only rarely, and thus is hard to detect. So far, all dark-matter searches have proved frustratingly inconclusive, so it is not surprising that there has been considerable interest in the neutron lifetime anomaly.

Neutron lifetimes can be measured in two ways. The first method is to confine ultra-low energy, ‘ultra-cold’ neutrons in a magnetic or material ‘bottle’ and count the number of neutrons remaining after a given period of time. In the second method, a beam of low-energy ‘cold’ neutrons is traversing a well-defined volume and the number of protons produced by decay over a given period is measured. Data collected over the years from these measurements, and then combined, seemed to indicate a bottle lifetime of 879 seconds, while the beam lifetimes were considerably longer at 888 seconds. In 2018, theorists suggested that the difference might be because the beam experiments measured only beta decay, whereas the bottle measurements picked up all decay modes, thus shortening the measured lifetime. They proposed that there might be extra decay channels into dark-matter particles in play to account for the difference.

Measuring the neutron lifetime accurately is important for several reasons. Crucially, it is needed to account for the evolution of matter in the Universe just after Big Bang (in particular, the amount of helium created), and also the development of galaxies and stars. In addition, it provides subtle clues, important in particle physics theory, to untangling the subtle interactions between quarks – the fundamental particles constituting neutrons and protons. 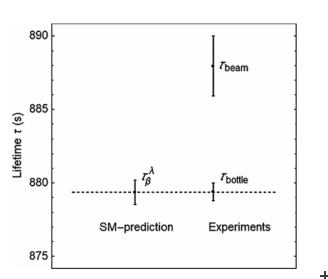 No dark side to neutron decay The neutron lifetime calculated from the beta asymmetry parameter (“SM-prediction” where SM stands for Standard Model) agrees perfectly with the experimental value obtained with the bottle method. Since the latter comprises all decay branches, there is no room for non-beta decays to dark matter particles as explanation of the lifetime value obtained with the beam method. Figure from [2] / cc-by-4.0.

The role of beta-asymmetry in measuring neutron lifetimes

One important parameter in particle physics (and for neutron lifetimes) is so-called beta asymmetry. Beta decay is governed by the weak interaction, one of the four fundamental forces of Nature. Surprisingly, this force endows a preferred direction on the emission of electrons in beta decay: electrons are emitted preferentially opposite to the spin direction of the decaying neutron.

Measurements of the beta asymmetry at the ILL started about 30 years ago, using beams of neutrons with their spins aligned in right or left directions (polarised). The resulting electrons emitted are then detected and counted in one detector at the left and in one detector at the right of the beam (geometries with the neutron spin aligned parallel or antiparallel to the beam and one detector upstream and one downstream are also used). More recently, the research teams involved have developed an experimental set-up capable of measuring the beta asymmetry parameter even more precisely than before. It makes use of the Perkeo III spectrometer (see picture above) developed at the University of Heidelberg and a pulsed neutron beam. ”The clouds of neutrons do not come into contact with anything as they fly through the spectrometer. It’s a very clean experiment,” says Torsten Soldner, a researcher at the ILL. Other advantages are the efficient helium-based spin filters that the ILL has developed to measure the polarisation of neutron beams and the intense beam provided by the cold neutron beam facility PF1B. The experiment was performed and analysed in a collaboration of scientists from the University of Heidelberg, the ILL, the Technical University of Munich and the Technical University of Wien and yielded the most precise value of the beta asymmetry parameter so far [1].

How does the measured beta asymmetry shed light on the neutron lifetime mystery? The neutron lifetime can be calculated using an equation that depends mainly on the beta asymmetry parameter and some results from nuclear decays. Using this equation, calculations showed that the measured beta asymmetry result (ie just from beta decay) gave a lifetime of 879.4 seconds, which coincided extremely well with the recent bottle measurements, see figure below. Since the bottle measurements pick up all decays, this agreement indicates there was not really any room for non-beta decays to dark matter particles after all [2].