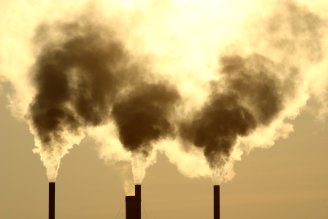 Scientists have designed a novel catalyst that overcomes the challenge of breaking down complex plant components to produce some of the highest yields of biofuel. In the study, scientists used ISIS to see how a model of the plant material was broken down at the surface of the catalyst. These results bring us one step closer to lessening our dependence on fossil fuels, and are an important development in our shift towards renewable energy.

The ability to produce sustainable fuel from renewable biomass is becoming increasingly important as we move away from our dependency on fossil fuels. The production and utilisation of biomass, or plant material, offers an energy alternative that is almost carbon neutral, as the carbon dioxide is recycled in plant photosynthesis.

In plants, the woody material that is used to produce fuel consists of three different components: cellulose, hemicellulose and lignin. Lignin is what gives trees their stiffness, but it also presents one of the greatest challenges to the production of biofuels. Compared to cellulose and hemicellulose which have relatively simple structures, lignin consists of complex networks of molecules which make it more difficult to break down and convert into useful fuel, often requiring high levels of energy or the use of corrosive chemicals. Therefore up to a third of plant material can go to waste or are burned as low-value fuel.

For the first time, scientists have been able to break down lignin in a one-pot process and produce record-high yields of liquid hydrocarbon fuel, without the need for chemical pre-treatment of the plant material.

The results have been published in Nature Communications.

Now that the conversion of lignin has been achieved, this study opens the doors to the development of future catalysts for converting biomass into fuel, in the shift towards renewable energy. 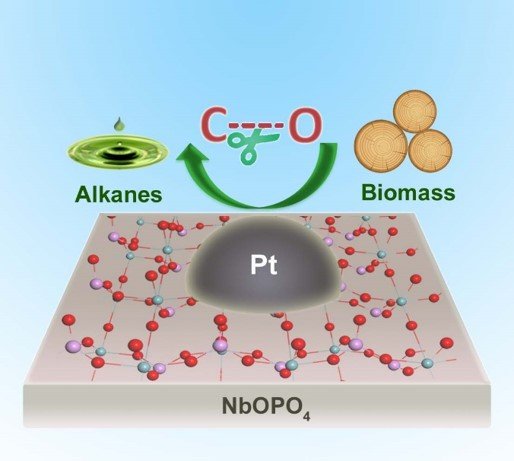 “State-of-the-art conversions of biomass into fuels typically require separations and pre-treatments to the raw biomass, thus suffering high energy penalties. This novel niobium-based catalyst showed exceptionally high activity in splitting the carbon-oxygen bonds, the most challenging step in the conversion of lignocellulosic biomass. Because of the high activity, this new catalytic process can directly convert raw biomass to liquid fuels without separations or chemical pre-treatments, leading to significant potential energy savings in the bio-refinery.” said lead-author, Dr Sihai Yang from the University of Manchester.

Catalysts increase the rate of a chemical reaction by reducing the energy needed for the reaction to occur. In this case, the catalyst is made up of the metal complex, niobium phosphate with small particles of platinum dotted across the surface.

“This multi-functional catalyst contains three active sites, that are metal platinum, niobium oxide and acid site, and the synergistic effect between these active sites is responsible for the high activity of the catalyst,” said lead-author Professor Yanqin Wang from East China University of Science and Technology.

In the process, the niobium phosphate catalyst stews with raw wood sawdust for 20 hours at 190 degrees celsius and a pressure of 50 atmospheres. No chemicals are needed to pretreat the plant material, and the result is a record-high yield of useful fuel in the form of hexanes, pentanes and alkylcyclohexanes.

Dr Yang visited the ISIS Neutron and Muon source to study what was happening during the interaction of the biomass and catalyst at the molecular level. Using an instrument called TOSCA, Dr Yang and ISIS scientist, Dr Stewart Parker used neutrons to see how a model of lignocellulose interacted with the surface of the catalyst to produce useful fuel.

“By using neutrons we can see more of the features that help us understand what is happening in the conversion of lignin to useful chemicals,” said Dr Stewart Parker from the ISIS Neutron and Muon Source.

For further information, the paper is available online.