Lubricating oil is essential for engines. Multi-disc clutches, like those found in motorcycles, are also lubricated and cooled with oil. The oil pump has to be driven by the engine at the same time, thus increasing the vehicle’s fuel consumption. The goal of developers is therefore to optimally lubricate the drive components – with the smallest possible volume of flowing oil. In order to observe how oil is distributed inside a clutch, developmental engineers from the Schaeffler-Brand LuK (D) together with scientists from the Paul Scherrer Institute in Villigen (CH) are working together, illuminating metals with neutrons. 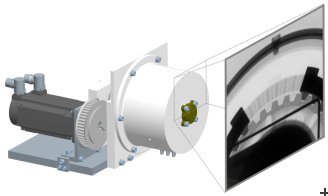 PSI At PSI, the metal casing of a motorcycle clutch was illuminated with neutrons, in order to make the distribution of oil visible. In contrast to X-rays, neutrons pass through the metal virtually unimpeded, and will only be absorbed by the lubricating oil.

A motorcycle has to be sturdy and fast – yet remain light and elegant. The engine and transmission are therefore designed to be as compact as possible. Between these lies the clutch, which transmits the power. In general, these are composed of multiple stacked discs, which are connected in sequence to the alternator or power train. When the stack of discs – which experts refer to as lamellae – are compressed together, they rub against each other, and force is transmitted from the engine to the drive shaft. In practice, these discs only grind together when they engage briefly during the startup cycle, after which they rotate, due to their frictional coupling with all of the others.

PSI Neutron radiography shows that only the first three clutch discs are supplied with sufficient amounts of oil, regardless of the speed or oil flow rate (the lamellae are numbered from left to right).

When the clutch is disengaged, for example, when changing gears, the pressure is released, and hence the frictional contact is broken – the engine in turn, is disconnected from the power train.

Using multiple stacked discs with a relatively small diameter, compact and lightweight clutches can be built. The drawback is that the heat generated through friction cannot be fully absorbed by a small volume. The clutch is therefore in danger of overheating. Because of this, multi-disc clutches are cooled with oil. 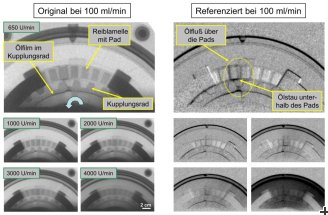 PSI The front view shows that oil accumulates below the friction pads, and then flows out along both sides of the lamella. On the right, references were made by recording two images, the first without and then with oil. The images show only the differences, and therefore only the oil.

Where does the oil go?
In a motorcycle, the oil pump that lubricates the engine is also responsible for supplying oil to the clutch. This oil is supplied via a hole in the shaft, and is distributed inside the clutch by the centrifugal force. Guide channels in the outer region spread the oil to supply all of the lamellae. “The key question of course is where the oil has actually flowed to. However, the clutch is enclosed whilst in operation, and you cannot see its interior,” said Matthias Wagner, development engineer for clutches at LuK GmbH & Co. KG in Bühl (D). He and his fellow developers turned to scientists at the Paul Scherrer Institute. With the help of neutron radiography, they can see right through metal and map the lubricating oil.

Neutrons pass through metal
At first glance, the images from neutron radiography are like conventional X-rays. Whilst X-rays are strongly absorbed by the metal and the lubricant is barely visible, it is the exact opposite with neutrons: metal is transparent and the oil absorbs the neutrons. “The reason is that the neutron beam is mainly attenuated by hydrogen-containing materials, including lubricating oil, which is composed of hydrocarbons. The aluminium clutch housing is practically transparent” said Christian Grünzweig, project manager for industrial applications of the “Neutron Imaging Group” at the Paul Scherrer Institute.

Only the front lamellae are coated
When Johannes Ruf and Daniel Helmer, also developmental engineers with LuK, viewed the first images, they were surprised: “Only the first three of the eight lamellae were coated with oil, with practically no oil reaching the others.” The results were independent of the engine speed. Whilst lamella 5 was still supplied with oil, on increasing the oil flow, lamellae 4, 6, 7 and 8 still ran, but were almost dry. “We actually want to reduce the flow volume. Next to the alternator, the oil pump is one of the biggest consumers driven by the engine. The more efficient the design of the oil supply, the less the pump needs to be boosted, and therefore the lower the fuel consumption of the motorbike. Our aim is to achieve optimal lubrication and cooling of the lamellae with a lower flow volume,” said Ruf and Helmer.

Special test rig developed
LuK Developmental Engineers and PSI scientists worked closely together on the measurements: so that the clutch could be illuminated from the front and from the side, onsite at Bühl, Schaeffler developed a test rig that could be laterally offset using an electric drive motor. In addition, instead of the lamellae, placeholders could be used to make a recording using only a friction disc. When using the entire clutch, the flows of oil through the various friction plates were superimposed, and could not be associated with any one in particular. Moreover, the friction discs were equipped with adjustable pads made from an organic material, which also absorbed the neutrons.

The test rig has paid off: “We have shown that the oil accumulates beneath the friction pads, and then flows out through the gaps in the lamellae”, said Grünzweig. “The fact that the rear lamellae were not supplied with oil, was because the flow of oil into the guide channel had already started to dry up at the third lamella.”

Stroboscopic Effect
The fast rotation of the clutch during recording was a challenge for the scientists – for neutron radiography, the exposure time normally lasts a few seconds “We chose an exposure time of 50 µs, that is 50 millionths of a second”, said Grünzweig. “To ensure the image quality remained adequate, a special light-amplifying detector system was used. We took 1000 individual images, which were then added together to form a total recording time of 0.05 seconds.” The individual exposures could be synchronised with the rotation of the clutch, so that the image is activated every time at exactly the same slat position. Grunzweig refers to this as dynamic neutron radiography.

The ICON beamline and the spallation neutron source SINQ at PSI were used as an experimental site. This large-scale research facility therefore not only supports fundamental research, but also helps to directly improve the reliability of motor cycle clutches.

About PSI
The Paul Scherrer Institute develops, builds and operates large, complex research facilities, and makes them available to the national and international research community. The Institute’s own key research priorities are in the investigation of matter and material, energy and the environment; and human health. PSI is Switzerland’s largest research institution, with 1500 members of staff and an annual budget of approximately 300 million CHF.

About LuK
The company LuK GmbH & Co.KG whose headquarters are in Bühl/D is part of the Schaeffler-Group, who manufacture precision products for anything that moves –machinery, equipment, motor vehicles as well as in the aviation- and aerospace industry. This globally-active group of companies is a leading global bearings manufacturer and a renowned automobile industry supplier. Currently, one in three new cars will roll off the production line fitted with an LuK-clutch. With 76,000 employees worldwide, Schaeffler is one of the largest family-owned German and European industrial companies.