On the way to a lower enriched fuel

For the development of a new fuel with lower enrichment, Uranium-molybdenum (UMo) embedded in an aluminum matrix is a promising candidate. However the severe diffusion reaction between the two materials Al and UMo during irradiation degenerates the fuel performance and therefore has to be suppressed. Hsin-Yin Chiang of MLZ has tested several coatings as diffusion barriers and qualified the most suitable materials combination. 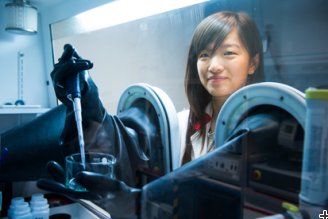 In order to reach a lower enrichment of uranium-235 in research reactor fuels, U-based fuel with high densities will be applied to compensate for the loss in enrichment in the fuel elements. The UMo alloy is a promising candidate as it can retain fission gases and allows an U density of up to 8 g/cm3 in UMo powder dispersed in Al matrix or up to 17 g/cm3 in monolithic UMo foils. However, an interdiffusion layer grows during irradiation between Al and UMo, which will degenerate the UMo fuel performance. One solution to suppress this undesired layer is to introduce a diffusion barrier into the UMo/Al system.

For her PhD thesis, Hsin-Yin Chiang tested four different coatings of the UMo on their effectiveness as diffusion barriers: titanium, zirconium, niobium, and molybdenum coating. By using swift heavy ion irradiation at the Maier-Leibnitz Laboratorium (MLL) in Garching, she simulated radiation damages during in-reactor irradiation. The material scientist of the Heinz Maier-Leibnitz neutron source found that whereas titanium and zirconium destabilize UMo, niobium and molybdenum have an excellent stability under irradiation.

Further analyses using nano-X-ray diffraction at the electron synchrotron DESY and Rutherford backscattering spectroscopy at Max-Planck-Institut für Plasmaphysik (IPP) confirmed these results. The most qualified material was molybdenum, as it forms a strong layer with aluminum; it does not intermix with UMo and Al. Based on Chiang’s findings, the scientists at MLZ propose for next international irradiation test cycle of high density fuels to include samples with a diffusion barrier made of molybdenum.