One step closer to finding the spin nematic 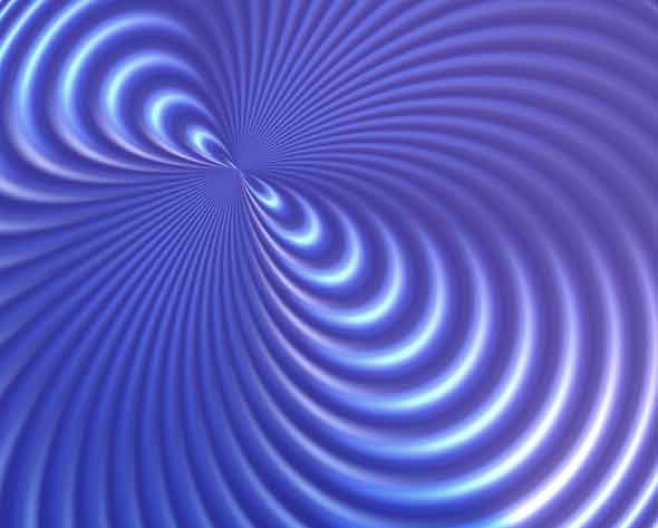 Neutron scattering at ANSTO has contributed to building evidence for the existence of a highly exotic and elusive state of matter, known as a magnetic ‘spin nematic’ phase in a natural mineral called linarite.

As well as answering a fundamental question in physics, these magnetic materials may have practical applications because the ability to manipulate magnetic spins is the basis of spintronic technologies, such as memory storage, magnetic sensors and quantum computing.

An international collaboration involving ANSTO, the Technical University Braunschweig, Helmholtz Zentrum Berlin, Leibniz Institute for Solid State and Materials Research, and Institute Laue Langevin has been using a range of investigative methods to resolve if the spin nematic state exists in real materials.
The research has been published in Physical Review Letters earlier this year.

“We have been looking for the magnetic equivalent of the electronic phenomena that occurs in a liquid crystal display, as used in computer screens and TVs, where the rod-shaped molecules align along a particular orientation but also move around in a liquid-like way,” said co-author Kirrily Rule, Taipan Instrument Scientist at ANSTO. Rule has been investigating novel and low dimensional magnetic materials for over a decade.

“The spin nematic phase is a highly novel magnetic state, in which the magnetic moments or spins in an ordered material line up in a direction when a magnetic field is applied, but simultaneously remain very dynamic, wobbling around, “she said.

In some atoms, the electrons have rotational motion, known as spin, which cause them to act like microscopic magnets or dipoles. The magnetic dipole moment is a vector quantity, so it has both magnitude (energy) and direction.

The direction of the magnetic moment can be influenced by a number of things such as external magnetic field or even the spin direction of a neighbouring ion.

“A magnetic moment can be thought of like a little bar magnet with an arrow that can point either north or south. You can change the direction of the orientation by applying a magnetic field, “ explained Rule. 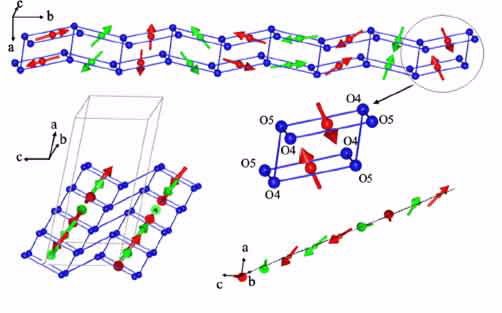 Neutron scattering can be used to determine both the magnitude and direction of this arrow, because the neutrons also have spin which can interact with the spin of a magnetic sample.

“Refinement of the data from the high intensity diffractometer Wombat can tell us precisely the direction of the spin,” said Rule.

In the case of both linarite and lithium copper vanadate, the spin state of the magnetic copper ions is ½.

Neutron scattering can be used to determine both the magnitude and direction of this arrow, because the neutrons also have spin which can interact with the spin of a magnetic sample.
“Refinement of the data from the high intensity diffractometer Wombat can tell us precisely the direction of the spin,” said Rule.

The team used linarite, PbCuSO4(OH)2, a naturally occurring mineral that closely resembles lithium copper vanadate LiCuVO3, a previously identified promising candidate for the spin nematic.
Just as the earth has orbital angular momentum and spin angular momentum from turning on its axis, an electron has angular momentum or spin that can be assigned a value as an integer or non-integer.

“This is important because for spin values less than or equal to 1, the materials can be considered as quantum magnets, where quantum fluctuations persist down to 0 Kelvin. We believe that quantum fluctuation may contribute to the spin nematic phase,” said Rule.
Linarite is also a quasi-one dimensional buckled structure of copper chains that magnetically couple in only one direction.
The copper ions in linarite and lithium copper vanadate both experience a phenomenon known as magnetic ‘frustration’, because there are competing ferromagnetic (FM) and antiferromagnetic (AFM) interactions. 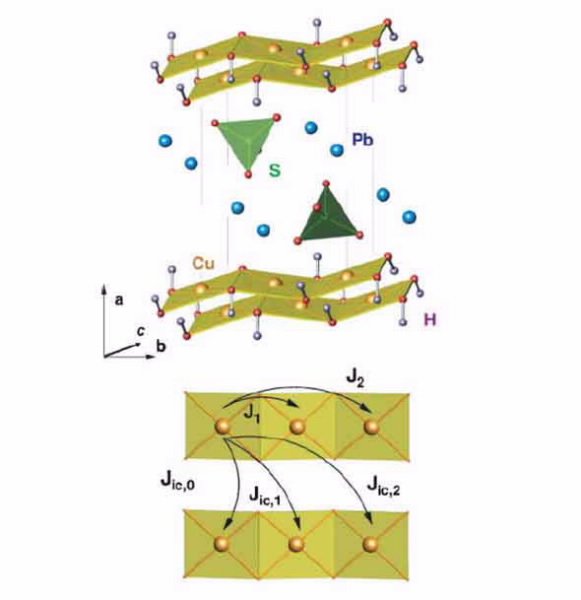 The magnetic ions will try to satisfy both their neighbours and their next nearest neighbours.

“But when this happens my neighbour and next nearest neighbour become frustrated because they also want to point in the same direction as each other,” said Rule.
Frustration was also thought to contribute to the spin nematic phase. 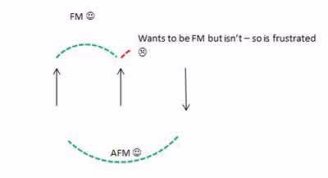 Since the magnetic spins can orient anywhere they like, the magnetic unit cell is not constrained to be a multiple of the nuclear unit cell. We observed that it was incommensurate very close to Msat.” explained Rule.

Linarite was a good choice for experimental purposes because it is a single crystal and reaches magnetic saturation (Msat) at 10 Tesla (T), a much lower field than the Msat of 44 T for lithium copper vanadate.

Achieving magnetic saturation was important because the spin nematic phase was thought to occur close to Msat. “All the magnetic moments should align with the applied field at Msat,” said Rule.

Rule was able to acquire key data points for a single crystal of linarite using Wombat at temperatures down to 0.05 Kelvin with external fields up to 12 T.

The combination of these extremely low temperatures and very high applied fields were challenging but allowed the experimental team to reach the very edge of the phase diagram with neutron scattering – something that had not been achieved for linarite before this.

“We also knew that we were more likely to see the spin nematic phase when it was as cold as possible,” said Rule. The magnetic ordering temperature of linarite is 2.75 Kelvin.

In previous research, Rule with Willenberg et al had plotted a magnetic field phase diagram for linarite.
In the current paper the team was interested in the magnetic propagation vector along the y axis in real space, which varied in the different magnetic phases.

The collaborators found that the propagation vector changed as the magnetic field varied, and the structure was incommensurate or commensurate within the different phases.

“This can occur because the magnetic unit cell is about spins and their orientation and this unit cell can differ from the nuclear unit cell which is fixed to the atomic position,” said Rule.
In some phases the linarite magnetic cell is a fraction of the atomic cell and incommensurate. 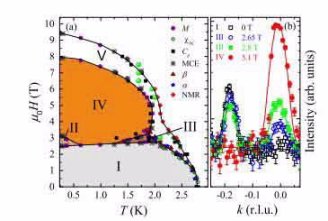 Like the ground state Phase I, Phase V was also incommensurate, during which the orientation of the magnetic spins was not a fixed multiple of the atomic structure.

“It is no longer the same building block size, you can’t fit the same blocks of the magnetic into the nuclear units as whole numbers,” said Rule.

“You can think about this number, the magnetic moment, as the length of the arrow.

As field is increased, the length has been significantly reduced in one direction, which suggests that it may have lost energy and has some component that is dynamic,” said Rule

In a strong magnetic field, such as 9 T, you would expect the local magnetic moments to become completely polarised.

The collaborative teams think this is due to weak but significant interchain interactions because of the closely coupled chains in linarite.

“But because the magnetic spin nematic phase is expected to occur when P=2 in Phase V, it’s the one we were most interested in,” said Rule.

INS allows you to analyse the intensity of scattered neutrons with respect to the momentum and the energy exchanged between neutrons and the scattering system.

“I think the origin of the spin nematic is competing interactions. The fact that we have a one-dimensional chain structure with a little bit of interchain, magnetic frustration and the quantum fluctuations.”

“Hopefully further investigations with inelastic neutron scattering will allow us to find definitive evidence of the spin nematic, to model things further and fully understand the interactions that bring it about,” said Rule.