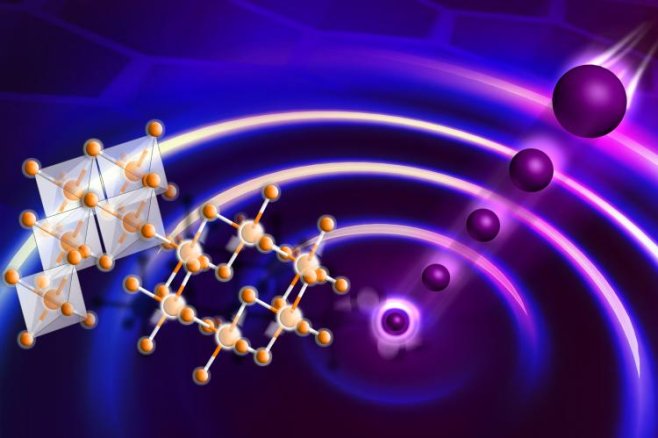 In 2006, the physicist Alexei Kitaev developed a theoretical model of microscopic magnets (“spins”) that interact in a fashion that leads to a disordered state called a quantum spin liquid. This “Kitaev quantum spin liquid” supports magnetic excitations equivalent to Majorana fermions—particles that are unusual in that they are their own antiparticles.

The presence of Majorana fermions is of great interest because of their potential use as the basis for a qubit, the essential building block of quantum computers.

Familiar magnetic materials exhibit magnetic excitations called “spin-waves” that occur in quantized lumps, but in the Kitaev quantum spin liquid, the lumps are split and the Majorana excitations are therefore termed “fractionalized.”

Scientists have theorized that Kitaev interactions exist in nature in certain materials containing magnetic ions that exhibit strong coupling between the electron spin and orbital angular momentum. Arnab Banerjee, the study’s lead author and a post-doctoral researcher at ORNL, explained that one way to observe spin liquid physics in such a material is to “splash” or excite the liquid using neutron scattering.

Banerjee and colleagues from ORNL and the University of Tennessee, working with collaborators from the Max Planck Institute in Dresden, Germany and Cambridge University in the United Kingdom, used the “splash” technique to investigate a two-dimensional graphene-like material, alpha-ruthenium trichloride. Neutrons shining onto and scattering from the material can deposit small amounts of energy that create magnetic excitations.

The form of magnetic excitations created in alpha-ruthenium trichloridewas found to be different from spin waves seen in ordinary magnets, but was very well-matched to the spectrum predicted for the Majorana fermions expected in the Kitaev quantum spin liquid.

“The concept of Majorana fermion originated in fundamental high energy particle physics, but we saw their signatures in a solid state material at modest temperatures,” Banerjee said. “Neutron scattering not only provided the ‘splash’ we needed to see them, but also directly measured the resulting magnetic excitations.

The Spallation Neutron Source’s SEQUOIA instrument is best suited for this research because the range of energy and momentum one can access with the instrument perfectly matches the regime where Majorana fermions show up.”

“The observation of these fractionalized excitations is truly remarkable,” said Steve Nagler, director of the Quantum Condensed Matter Division at ORNL and co-corresponding author of the paper. “There has been a huge push recently to see if Kitaev quantum spin liquid physics can be found in materials. Time will tell whether this represents a first step on the road to a new qubit technology.”

The experiment required extremely pure samples that were prepared by Banerjee and Craig Bridges of ORNL. The interpretation of the experiments was helped by theoretical predictions of team members Roderich Moessner of the Max Planck Institute, and Johannes Knolle of Cambridge and their colleagues.

“This study proved that the proper honeycomb lattice materials can have the exotic excitations long sought by the scientific community, potentially bringing us closer to realizing Kitaev’s vision of topologically protected quantum information,” said Alan Tennant, chief scientist for Neutron Sciences at ORNL and a co-author on the paper.

The research team also included Jiaqiang Yan, Adam Aczel, Matthew Stone, Garrett Granroth, and Mark Lumsden from ORNL, David Mandrus, a joint faculty of University of Tennessee and ORNL, Ling Li and Yuen Yiu from the University of Tennessee, Dmitry Kovrizhin from Cambridge, and Subhro Bhattacharjee from the Max Planck Institute. The paper is published as “Proximate Kitaev quantum spin liquid behaviour in a honeycomb magnet.”

The Spallation Neutron Source and the High Flux Isotope Reactor are DOE Office of Science User Facilities. UT-Battelle manages ORNL for the DOE’s Office of Science. The Office of Science is the single largest supporter of basic research in the physical sciences in the United States, and is working to address some of the most pressing challenges of our time. For more information, please visit http://science.energy.gov/.