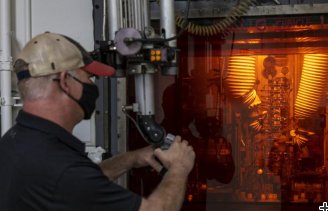 ORNL-Cf-252 Oak Ridge National Laboratory’s team that is charged with producing californium-252 helps deliver an isotope with a variety of uses, including starting up new and dormant nuclear reactors. Credit: Carlos Jones / ORNL

Now, ORNL is once again at the forefront of reactor history.

The reactors, now under construction at Georgia Power’s Plant Vogtle in Waynesboro, Georgia, will be the first new nuclear reactors built in the United States in over 30 years.

The bulk wire produced by ORNL will be fabricated into devices called startup sources. Because fresh nuclear fuel lacks the neutron flux necessary to safely initiate a chain reaction, it must be supplemented by such startup sources made from Cf-252 or other strong neutron-emitting radioisotopes.

The DOE Isotope Program relies on ORNL’s High Flux Isotope Reactor, HFIR, with its high neutron output, and ORNL’s Radiochemical Engineering Development Center, REDC, with its array of shielded hot cells, to supply a broad stakeholder base with Cf-252 and other radioisotopes.

“There are a lot of steps, and it requires a lot of precision,” said ORNL’s Julie Ezold, Cf-252 program manager. “This is work that would be impossible on a tabletop, and all of it is done in hot cells.”

The complex process can be broken down into three main stages: irradiation, purification and fabrication.

First, curium targets – comprised of curium oxide pellets encapsulated in long aluminum tubes – are fabricated in the shielded hot cells of REDC, then shipped a short distance to HFIR for irradiation.

Once the targets are loaded into HFIR, the research reactor bombards them with a neutron flux of 2.1 quadrillion neutrons per square centimeter per second. The reactor-emitted neutrons transform some of the curium atoms into other elements through a process called beta decay. The resulting substance, Ezold said, is a probabilistic mix of Cf-252, curium starting material, and other actinide elements, including berkelium and einsteinium.

Next, the irradiated targets are removed from HFIR and transferred to one of REDC’s two hot cell facilities. The irradiated targets are first processed to separate and purify the Cf-252 then transferred to the other REDC hot cell facility for further processing into wire. The hot cell’s 4.5-foot-thick concrete walls and lead-glass window allow hot cell technicians to safely perform radiochemical work with remote manipulator arms.

Doing radiochemistry at ORNL from a distance isn’t easy, but hot cell operations supervisor Ed Smith, along with hot cell technicians Dan Bettinger and John Courtney, have the experience and expertise to get it done.

“On paper, it’s a complex process,” Smith said, “but to us, it’s straightforward.”

Part of the challenge is the scale of the materials involved, which are so small the technicians must use tweezers via manipulator arms to pick them up. “The tweezers definitely ramp up the difficulty,” Bettinger said. “It can be kind of stressful,” Courtney agreed.

To begin the purification process, the hot cell technicians load the impure material onto an ion exchange column, a pressurized 4-foot-tall tube used for in-cell chemical separation work. They flush the material down the column through resin, separating the Cf-252 from the other actinides. Technicians repeat these multistep column runs as many times as it takes to completely purify the Cf-252.

That process creates a lot of unwanted liquid, however, so it requires an additional step, volume reduction, said ORNL’s Scott White.

“It takes hundreds of milliliters,” White said. “You’re looking to end up with about 60 milliliters.”

Fabrication, too, is a multistep process. The technicians perform a chemical process called a combined precipitation to obtain a solid precipitate of Cf-252 and palladium. To remove any moisture, they dry the precipitate in an oven at several hundred degrees Celsius, drying it into an oxide powder. Next, the technicians press the powder into pellets using an in-cell pellet die assembly and hydraulic press. Then they melt the pellet at more than 1500 degrees Celsius in a melting furnace while alloying it with additional palladium metal.

Finally, technicians roll the melted pellet on a jeweler’s mill into bulk wire with a diameter of less than tenth of an inch, then segment it into smaller lengths. Once wire segmentation is complete, they are welded into intermediate capsules, sent to a “clean cell” for decontamination and leak testing, and are ready for shipment to DOE Isotope Program customers.

ORNL has produced Cf-252 on a regular basis for decades, but this latest batch is special because of its role in the historic Plant Vogtle reactor startups.

“It is humbling to know that the Cf-252 material that we produce at ORNL and is provided to industry by the DOE Isotope Program will be used to start up the first new nuclear units built in the United States in the last three decades,” Ezold said.