Penetrating the quantum nature of magnetism

Scientists using inelastic neutron scattering at the ILL have for the very first time given a complete description of a one-dimensional spin-1/2 Heisenberg antiferromagnet as realized in nature in copper sulphate – incidentally, an everyday compound used in school science experiments as well as in herbicides and algae control in swimming pools… Their results, published in Nature Physics, provide a fully quantitative validation of the spin half chain Heisenberg model for a quantum spin liquid.

Physics works by trying to explain complex things with simple models. Magnetism is a particularly tough nut to crack as it shows to be very resistant to simple description. This is primarily due to the quantum mechanical nature of magnetic phenomena and makes for the excitement of the field.
One of the simplest models in magnetism is Heisenberg’s anti-ferromagnetic spin ½ chain. Despite its simplicity it took almost a hundred years of theory and many experiments to come finally to grips with it. The latest stage dates back to about 2006, when modern calculations allowed a clear theoretical prediction. Nonetheless, experiments had difficulties in gauging the predictions of theory. The problem was very much related to difficulties in measuring neutron scattering intensity on an precise absolute scale.

The breakthrough was achieved by using a standard of comparison intrinsic to the sample. Copper sulfate materializes in a nearly perfect way the one-dimensional spin ½ Heisenberg antiferromagnet. By applying a strong magnetic field Mechthild Enderle and her collaborators drove the magnetic system of copper sulfate into a well understood “classical” ferromagnetic state, for which the scattering intensity is known precisely, and that as such could serve as a reference. This allowed them to eliminate all extrinsic corrections and thus allowed them to demonstrate a quantitative agreement between calculation and theory. As predicted nearly one third of the excitation spectrum stems from higher-order spinon states. One of the holy grails of magnetism can be considered found.

The experiments were achieved through inelastic neutron scattering experiments performed on cold triple-axis spectrometer IN14 at ILL.

1. The Institut Laue-Langevin (ILL) is an international research centre based in Grenoble, France. It has led the world in neutron-scattering science and technology for almost 40 years, since experiments began in 1972. ILL operates one of the most intense neutron sources in the world, feeding beams of neutrons to a suite of 40 high-performance instruments that are constantly upgraded. Each year 1,200 researchers from over 40 countries visit ILL to conduct research into condensed matter physics, (green) chemistry, biology, nuclear physics, and materials science. The UK, along with France and Germany is an associate and major funder of the ILL. 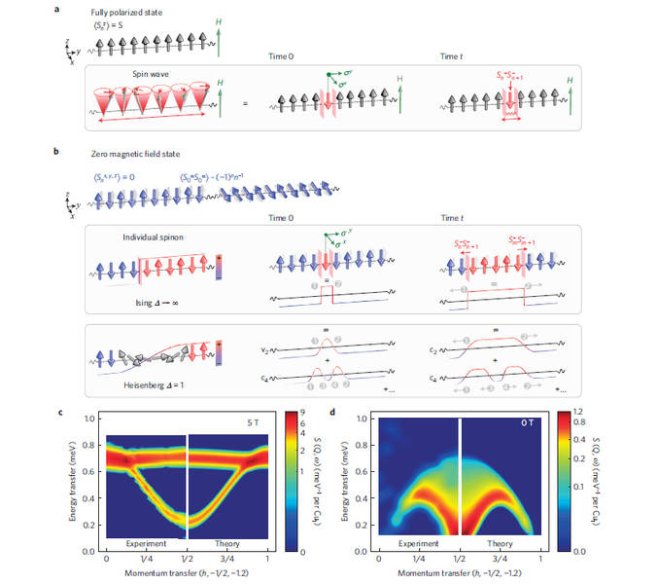 Figure 1 Schematic representation of the magnetic excitations in a spin-1/2 (Heisenberg) antiferromagnetic chain and overview of the neutron scattering results for CuSO4- 5D2O.

a. Fully polarized (saturated) state. The creation of a magnon by inelastic scattering of a neutron can be imagined as a single spin flip. The Zeeman energy prevents any growth of the flipped section that propagates like a single entity. This magnon can classically be visualized as a spin wave, a coherent precession of the local spin expectation value around the field direction.

b. Zero magnetic field state. Snapshots of large antiferromagnetically correlated regions of the ground state. The spins could be found in a locally antiferromagnetic configuration with equal probability in any direction (for example, the opposite one (shadows)). The neutron acts on the singlet ground state and excites triplet states which we may imagine as a local spin flip surrounded by two domain walls, which individually correspond to a spinon carrying spin-1/2. The spatial extent of a spinon depends on the anisotropy: in the Ising limit, a local spin flip decomposes into two spinons; in the Heisenberg limit, it decomposes into a rapidly converging series of statescontaining two, four and higher even numbers of such spinons.

c. Intensity maps of the experimental and theoretical magnon dispersion in the fully polarized phase of CuSO4-5D2O for µ0 H =5T> 0Hsat and T ∼ 100 mK, above the Néel transition temperature to three-dimensional antiferromagnetic ordering. The two observed branches (flat and cosine-shaped) are associated with two non-equivalent Cu2C sites in CuSO4 -5D2O (Cu1 and Cu2, respectively). The cosine-shaped dispersion corresponds to the excited magnon of the saturated Heisenberg antiferromagnetic Cu1 chain and the flat branch around 0.7 meV is a transition between two local Zeeman levels of the decoupled Cu2 sites.

d. Intensity colour maps of the experimental inelastic neutron scattering spectrum of the Cu1 chain spins in the zero-field phase of CuSO4-5D2O, and theoretical two- and four-spinon dynamic structure factor.