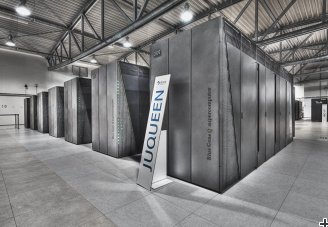 JUQUEEN The calculations for the study by the international team of physicists were carried out on the Juelich supercomputer JUQUEEN.

When atomic nuclei contain too many neutrons, they break apart. An international team of physicists has now developed a breakthrough method to calculate the exact point at which the nuclei become unstable. The results allow more detailed insights into the structure of atomic nuclei, which scientists hope to use to understand more about the creation of the elements after the Big Bang. In addition to the Jülich Nuclear Physics Institute, the universities of Bonn and Bochum as well as various US universities were involved in the study. The calculations were performed on the Jülich supercomputer JUQUEEN. The study has been published in Physical Review Letters.

Atoms are composed of a hull and a core. The hull is formed by negatively charged electrons. These are responsible for the atoms ability to bond together chemically. The atoms core (or nucleus) on the other hand is charged positively. It binds the electrons to the atom by the electrostatic attraction.

The positive charge in the nucleus is caused by protons. Usually there are as much protons as electrons, and therefore the atom as a whole is electrically neutral. A carbon atom e.g. consists of six electrons and six protons. Additionally the core of the carbon atom also contains uncharged particles which are called neutrons. If the atomic nucleus contains too much neutrons, it becomes unstable. In this case the atom can break up – it decays.

It is different from atoms to atom, when exactly this happens. “So far it was not possible to exactly calculate at which number of neutrons this point is reached “, says Prof. Ulf Meißner from the Juelich Nuclear Physics Institute (IKP) and the Helmholtz-Institut für Strahlen- und Kernphysik at the University of Bonn. The reason is that there are multiple forces acting inside the nucleus. The established algorithms can calculate some of them exactly, but can only approximately determine others.

The method Meißner and his fellow researchers have now published is different. In a first step it is based on the deprivation of grades of freedom. In reality the protons and neutrons can be arbitrarily scattered in space. For their calculations the researchers restricted this freedom: They ordered the particles of the nucleus on the nodes of a three-dimensional lattice, and therefore only allowed them to take well-defined positions. For a latticework of this kind it is relatively easy to determine the binding energy between the particles.

In the next step the particles of the nucleus where allowed to switch places. This way a new lattice configuration was formed. If it was energetically more favorable than its predecessor, it was used as a base for a new switching of places between the particles. “We repeated this step million-fold and came closer and closer to the energetically optimal configuration for the nucleus.” Meißner explained. “On this basis we were then able to calculate whether the atoms core with the given number of neutrons and protons is stable or not.”

Experts call this approach Monte Carlo method. It provides exact results regarding the binding situation in the atoms core, but as a consequence of the allocation of the particles there are also drawbacks. It is e.g. not possible to calculate the exact density distribution of the nucleus. The researchers however modified the method in a way that makes this determination possible as well.