HOUSTON — (Sept. 29, 2016) — New findings from researchers at Rice University, the University of Illinois at Chicago and the University of California at San Diego (UCSD) suggest that condensed-matter physicists need to rethink how magnetic fluctuations arise in both unconventional and high-temperature superconductors. 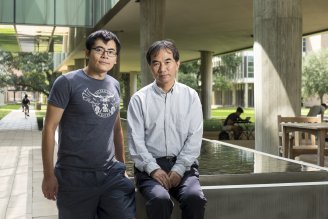 “Our results challenge the present understanding of magnetic fluctuations in high-temperature superconductors,” said Rice graduate student Yu Song, lead co-author of a study this week in the scientific journal Nature Communications. “Specifically, our findings suggest that magnetic fluctuations similar to those found in magnetically ordered compounds may, in fact, be common to many unconventional superconductors. 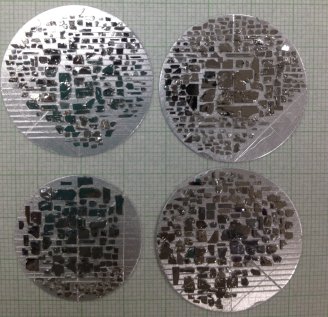 One electronic behavior that’s been observed in all classes of unconventional superconductors is neutron spin resonance, a collective magnetic excitation that arises slightly below the critical temperature.

In the new experiments, Song, Rice physicist Pengcheng Dai and colleagues worked for two years to observe resonance behavior in three unconventional superconductors, one made of cerium, cobalt and indium and two others in which ytterbium was substituted for portions of cerium. All three compounds are heavy fermions, so-named because of the tendency of their electrons to behave as if they are far more massive than normal electrons.

“Spin resonance modes are found in both copper- and iron-based high-temperature superconductors, and our results on both doped and undoped cerium-cobalt-indium — prototypical heavy fermions — provide new insights,” Song said. “Importantly, superconductivity in all these compounds is believed to be mediated in similar ways by magnetic fluctuations, including those we observe in spin resonance modes, and while it’s generally accepted that spin resonance is a signature of unconventional superconductivity, there is no consensus on what causes it to happen.”

Song, Dai and colleagues used a technique known as inelastic neutron scattering to examine the resonance behavior of cerium-cobalt-indium and “doped” compounds in which either 5 percent or 30 percent of the cerium was replaced with ytterbium. The experiments were conducted in 2014 at the Heinz Maier-Leibnitz Zentrum at the Technical University of Munich and in 2015 at the National Institute of Standards and Technology’s Center for Neutron Research in Gaithersburg, Md.

All samples were created by UCSD physicist Brian Maple and colleagues, and Song spent hours painstakingly aligning hundreds of the tiny samples and gluing them onto aluminum substrates for testing. By cooling the samples to critical temperatures and examining how neutrons scattered from the samples throughout the cooling, Song, Dai and colleagues were able to show how the magnetic resonance of the materials developed and behaved at the critical point where superconductivity arose. 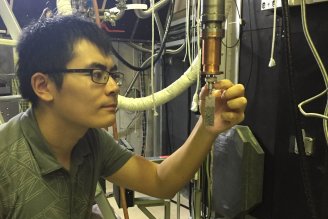 “People have known for years that magnetic order — the alternating alignment of spins that is characteristic of magnetism — actually competes with and suppresses superconductivity,” said Dai, professor of physics and astronomy at Rice and the lead scientist on the project. “Intriguingly, magnetic fluctuations in magnetically disordered compounds — fluctuations that resemble what we see in magnetically ordered compounds — appear to be essential for superconductivity.”

In one key finding, the behavior of the resonance in both the doped and undoped samples appeared the same; this discovery directly conflicted with behavior that would be expected based on Landau’s classical theory governing the electronic behavior of metals. Co-author and theoretical physicist Dirk Morr of the University of Illinois at Chicago said this observation shed new light on a longstanding debate between two theoretical camps that attempts to explain the nature of resonance modes.

Additional co-authors include John Van Dyke of the University of Illinois at Chicago; I.K. Lum, B.D. White, Sooyoung Jang, Duygu Yazici and Brian Maple, all of UCSD; L. Shu of Fudan University in Shanghai; A. Schneidewind and Petr Cermák of Heinz Maier-Leibnitz Zentrum in Garching, Germany; and Y. Qiu of the NIST Center for Neutron Research.

The research was supported by the Department of Energy, the Welch Foundation and the National Science Foundation.