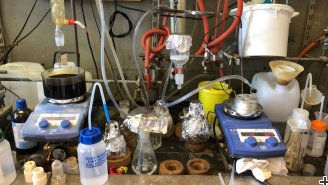 Working in the lab can be a bit messy This shot is from the actual production of the polymer at the chemistry lab. But like Heloisa Bordallo's students say: "Clean lab = nobody is working!" Credit: Heloisa Bordallo

Researchers at the Niels Bohr Institute and the Department of Chemistry at University of Copenhagen, have recently designed a porous polymer aiming for the capture of small molecules. Ammonia is a toxic gas widely used as a reagent in industrial processes or resulting from agricultural activities, causing irritation in the throat, eye damage and even death to humans. Being able to capture it with this new method could have huge health benefits. The result is now published in ACS Applied Materials & Interfaces.

Associate professor at the Niels Bohr Institute, Heloisa Bordallo, explains: “If we want to use this material in a real application to solve an important societal problem like ammonia pollution, it is important to explain how ammonia is captured by the porous network in the polymer. This implies that we needed to come up with a technique that allows us to find out exactly how the interaction between the polymer and ammonia takes place. Being successful in answering this question, will make us able to understand better how this or other polymers can be efficient in multidisciplinary domains, including nanomedicine and protective coatings. If scaled up – which is not a simple process – this could have a significant positive impact on the working environment of many people all over the globe.”

The polymer showed surprisingly good characteristics already at the outset

Assistant professor Jiwoong Lee at the Chemistry Department and Rodrigo Lima, a former postdoc at the Niels Bohr Institute, synthesized 2 grams of the polymer, which doesn’t sound like a lot, but it is actually substantial, considering the amounts chemists normally work with is only a few milligrams. After this first step, the team used a lot of different techniques to characterize the material. Assistant professor Jiwoong Lee explains, “The synthesis process often involves washing the material with solvents and it was a nice surprise to realize that the porous polymer actually kept a portion of these solvents inside. This was indicative of the material’s ability to perhaps capture other pollutants, such as ammonia.”

The researchers performed experiments at the ISIS Neutron and Muon Source part of the STFC Rutherford Appleton Laboratory in the UK, where the dynamics of the hydrogen bonds was investigated by collecting neutron scattering data at low pressure to get ammonia into the polymer. Neutron scattering is a technique able to describe where the atoms are located and at the same describe how the atoms are moving inside a material. Afterwards, Rodrigo Lima, former postdoc at the Niels Bohr Institute, set up an experiment at the thermal analysis laboratory at the Niels Bohr Institute and demonstrated that ammonia was not only captured, but attached to the porous materials. “This was a real surprise! The polymer binds ammonia very strongly,” he says.

“In order to be able to explain this seemingly strong connection between the polymer and the ammonia, we needed to know the structure of the polymer. But since this particular polymer is amorphous, it is difficult to fully characterize its structure. In a way you could say that we had ticked the box of capturing the ammonia, but we still needed to explain how this happens – and for that we needed a better view of the structure, which was unattainable. Quite a dilemma to have full success in one part of the project, and not be able to explain exactly why.” Heloisa Bordallo explains.

The researchers made different combinations of the polymer building blocks and were able to calculate a spectra, using a computational modeling method called DFT, from a combination that came closest to being similar to the measurements in the real sample. This, finally, made them able to ‘tick the box’ of interpreting how the polymer binds.

“There are numerous applications for a polymer that captures ammonia,” Jiwoong Lee explains. “It would be useful in labs, as coating for masks to wear for personal safety, as ammonia is toxic and also very corrosive. It could be used as filters, reducing the spread of ammonia released through the exhausts from many types of industry. Thinking ahead, it is possible that the polymer technique could be applied to other types of polluents as well.”

Heloisa Bordallo wishes to apply machine learning to amorphous systems. For this experiment, she and her colleagues made the experiment ‘by hand,’ so to speak, but it is perhaps a more viable way to go about this process to use machine learning and artificial intelligence. Applying deep learning algorithms can help in accurately classifying amorphous materials and in characterizing their structural features. “Then by combining machine learning with theoretical calculations we will be able to analyze the neutron scattering data in a much more elegant way,” she says.