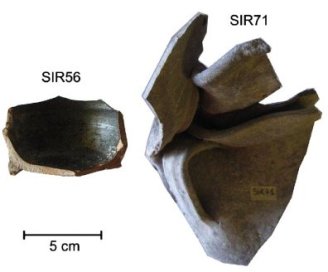 This paper is focused on a spectroscopic study of some pottery shards from an archaeological site in Syracuse (Sicily, Southern Italy), dating back to the Hellenistic–Roman period. Structural characterization was performed at different scales of observation, i.e. from macroscopic to mesoscopic. The main goal was to point out the potentiality of the small angle neutron scattering (SANS) technique as a non-invasive analytical tool in archaeometry, also in conjunction with other, more usual, methodologies. Correlation of experimental data, i.e. macroscopic typology and texture, obtained from petrographic analysis, and radius of gyration and fractal dimension of the interfaces of the mesoscopic aggregates obtained using SANS, together with mineralogical X-ray diffraction (XRD) and scanning electron microscopy (SEM) analysis, allowed hypotheses to be made on the production technology of the investigated samples.