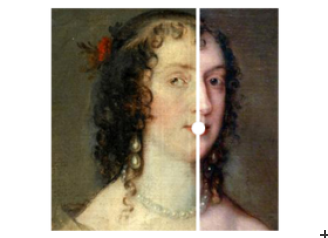 Artwork does not last forever. This is particularly true for paintings, which are appreciated for their visual appearance, but inevitably deteriorate through physical processes such as the deposition of air-borne dust and soot, oxidation, and attack by free radicals. As a result, after 50 to 100 years, a once-colourful painting that was exposed to city air may have become uniformly brown, or black, or white, and its protective varnish may have become opaque, cracked and irregular.

In order to mitigate these effects, ancient paintings are periodically ‘restored’. The restoration is a major transformation: it aims to re-establish the visible appearance of the original painting through the dissolution and replacement of most of the varnish that covers the paint layer, replacement of part of the pigmented layer, extraction of ‘dirt’ that may have been deposited near the surface of the varnish layer, and filling of cavities that may have blown up during accidental exposure to water.

Typically a painting from the 17th century may have been restored four times, with each operation considerably altering, in particular places, the composition and the cohesion of this composite material.

It is often said that the 20th century has been the century during which the largest number of paintings have been damaged, not through war or natural disasters but through deliberate restoration operations. To mitigate this destruction, there is an urgent need for a deeper understanding of the processes that are employed in restoration operations, or that take place later, as consequences of such operations.

These processes are thought to involve basic polymer physics – consequently, scientists have devised a set of methods, based on the use of the neutron beams of the Institut Laue-Langevin (ILL) – the world’s flagship neutron science facility – to examine the processes thoroughly. Through the subsequent understanding, it should become possible to design automated restoration methods that will be completely harmless to the works of art, particularly in the long term.

A critical task in the restoration consists of removing the damaged or opaque outer part of the varnish film, and replacing it with fresh, transparent varnish. Commonly, the restorer will use a swab soaked with solvent to transfer the solution to the painting’s film and remove the outer part of this old varnish with the swab, using minimal shear.

The painting is at high risk of damage caused by transferring excessive solvent, which infiltrates the paint layer. Here it may reduce the cohesion of the composite, enter cracks, and create capillary bridges that exert stresses on the material. A major improvement to art restoration was the introduction of hydrogels that contain a known quantity of solvent, and give better control of the amount of solvent that is transferred to the varnish. Still, there remains a major problem with the final distribution of the solvent in the varnish layer. The danger posed to a painting by restoration varies between cases:

The ‘safe’ case for a painting: Damage is less likely if the concentration profile of solvent in the varnish is a step function. This involves almost no solvent in the inner part of the varnish layer, in contact with the pictorial layer; and a high concentration of solvent in the outer part of the varnish. Both regions are separated by a ‘front’, where the macromolecules switch from ‘glassy’ to ‘mobile’. This migration of small molecules into a dense polymer matrix is sometimes called ‘diffusion of the second type’, because the rate of penetration and migration depends on the mobility of the polymer network, and therefore on the concentration of small molecules that have already entered the polymer network.

We studied the removal of varnish layers on solid supports by organic solvents as used in the restoration of easel paintings. We tested a proposed concept in art restoration of diluting the solvent (benzyl alcohol) with water, to limit the amount of ‘aggressive’ solvent in the system.

We observed that de-wetting of the whole varnish may happen (rather than controlled dissolution) above a critical solvent concentration due to the water presence. This would be catastrophic for the painting, as this would expose the pigment layer to the cleaning liquid.

Then the central part of the project involved the use of the neutron reflectometry technique on FIGARO to determine the depth profile of solvent concentration in the film of varnish, which was sandwiched between a bulk layer of water and solvent and a single crystal silicon substrate. The varnish layer thickness was ~100 nm, and was prepared by spin-coating. Complementary measurements were carried out using Atomic Force Microscopy.

By examining this commonly used system for art restoration using high resolution neutron reflectometry, the study demonstrated that increased concentrations of solvent and prolonged exposure causes water-filled cavities to appear and grow, which leads to the breakup of varnish. Subsequently, common expectations in cultural heritage regarding the behavior of solvent mixtures in the restoration of easel paintings should be revised.

The findings of this study can inform the creation of important standards that would open the doors to safer restoration processes as well as the potential for automated techniques in the field. However, human intervention and supervision will remain absolutely necessary to ensure that any machine carrying out the process remains ‘safe’ for the painting.