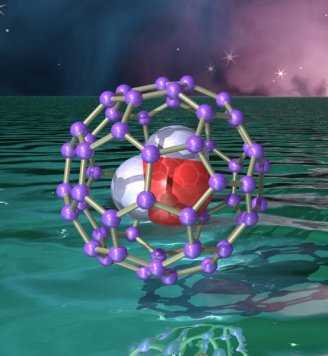 Neutron scattering experiments at the Institut Laue-Langevin (ILL) have uncovered the first known quantum selection rule in molecules, a law of nature that prevents certain transitions between different quantum states.

The experiments were carried out on endofullerenes, molecules of C60 into which smaller molecules of Hydrogen (H2) had been inserted. The results, published in Physical Review Letters, represent the first known example of a quantum selection rule found in a molecule.
Similar techniques were also used by the same team to uncover an exciting new symmetry-breaking interaction of water molecules with C60 cages, published last month in Physical Chemistry Chemical Physics.

The use of fullerenes such as C60 to trap smaller molecules, using cutting-edge molecular surgery techniques, was pioneered over the last decade. A complex series of chemical reactions is needed to open an orifice in the C60 cage which allows the smaller molecule to be inserted at high pressures to form a sealed structure that resembles a baby’s rattle. The resulting complex provides a ‘nanolaboratory’ environment ideal for examining the trapped molecule via spectroscopic techniques.
By exposing the samples to a continuous beam of neutrons, the energy levels of the molecular complex can be accurately determined. The use of neutrons is ideal for experiments of this kind owing to their fundamental magnetic spin, which allows them to drive a wider range of transitions than would be possible with photons.

The neutron scattering experiments conducted with a mixture of ortho and para hydrogen showed that a number of forbidden transitions from the para-H2 ground state were systematically absent from the resultant spectra. This confirmed the existence of a molecular selection rule, a discovery which runs counter to the widely held view that such molecular compounds are not subject to any selection rules.

Prof Mark Johnson, who contributed to the experimental work undertaken at ILL, said “This is a fantastic example of an international collaboration to study a unique sample of which only tens of milligrams exist worldwide. The Japanese first learned how to open up C60, and the collaboration with researchers in New York gave an improved understanding of these quantum systems. Tiny quantities of the sample were exposed to the world’s highest neutron flux at the ILL in experiments that would not have been possible some years ago.”

He added “The experiments provide a way of isolating hydrogen in what is effectively a spherical environment, whose symmetry makes the theoretical calculations a great deal easier. Such well-defined systems, which have not existed to date, provide an excellent test bed for quantum theory.”
Similar experiments conducted with forms of H2O known as ortho- and para- water also revealed a previously undiscovered splitting of the ortho-H2O ground state, pointing to a symmetry-breaking interaction which arises when the molecules are isolated in the C60 cages. Whether the molecular confinement or a set of longer range interactions is responsible for the observed symmetry breaking is a topic of considerable interest and one worthy of further research.

About ILL – The Institut Laue-Langevin (ILL) is an international research centre based in Grenoble, France. It has led the world in neutron-scattering science and technology for more than 40 years, since experiments began in 1972. ILL operates one of the most intense neutron sources in the world, feeding beams of neutrons to a suite of 40 high-performance instruments that are constantly upgraded. Each year 1,200 scientists from more than 30 countries worldwide visit ILL (2000 visits), to conduct research into condensed matter physics, (green) chemistry, biology, nuclear physics, and materials science. The UK, along with France and Germany, is an Associate and major funder of the ILL.