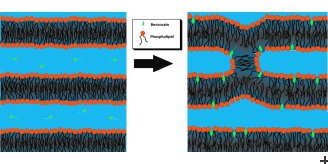 Cell membrane alterations Substances that are able to access the membrane like benzocaine (green) can accumulate inside the lipid double layers and alter their structure. Neutron probing is an ideal way to verify such alterations. Copyright: Forschungszentrum Jülich

Drugs can alter the structure of cell membranes, which can affect their effectiveness or cause undesirable side effects. The structural changes in cell membranes caused by drugs have not yet been sufficiently investigated. Researchers from Jülich, Garching (near Munich), Georgia, and France want to change this: they have developed a new method in neutron research with which any deformation of the membranes can be detected faster and more easily than previous methods permitted.

Cell membranes encase the human body’s cells like a protective skin. They are very thin – 10.000 times thinner than a single human hair. Their basis is formed by a double layer made from partly water repellent molecules, so-called lipids. In this double layer different protein molecules are located which compose e.g. gates used for transporting nutrients and semiochemicals in and out of the cell, as well as for discarding waste products. These gates are common points of attack for drugs.

Researchers from Jülich Forschungszentrum, Heinz Maier-Leibnitz Zentrum in Garching, Germany and Tbilisi State University in Georgia, as well as from Laboratoire Léon Brillouin in Saclay, France conducted investigations using a model system which did not contain stored proteins, but is otherwise remarkably similar to the cell membrane: a double layer from soy-lipids. A substantial advantage of this method is that structural changes can be noticed on the evenly formed film more easily. In addition the researchers where able to apply the lipid layer to a plain surface. This also helped to improve the measurements results.

To test their method, the researchers investigated how two common medical substances affected the structure of the membrane. They verified that the local anesthetic benzocaine and the beta-blocker propanolol either stiffen the model membranes and make them go brittle, or let connections grow between both layers of the membrane. Both reactions are physiologically not desirable and could be the reason for side effects, appearing with overdosing or long-term use of the substances, as Dr. Henrich Frielinghaus suggests. He is responsible for the small-angle diffractometer KWS-1, which is operated by the Jülich Centre for Neutron Science (JCNS) at the Heinz Maier-Leibnitz Zentrum in Garching. Such hypotheses can not be tested directly by the new method. According to Frielinghaus however, the fundamental effect of the substances on the membrane is clearly identifiable, and the neutron probing conducted by him and his colleagues can provide indication, if further tests are meaningful. The researchers can test about ten substances per day.