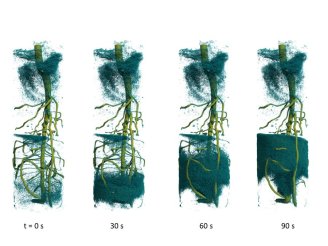 WASHINGTON — For the first time, researchers have captured neutron tomography images in about a second, nearly an order of magnitude faster than previously reported attempts. Until recently, long image acquisition times have been the major obstacle to using this non-invasive technique to study dynamic 3D processes such as the water exchange between roots and soil.

“The ability to acquire images so quickly allows us to capture, with unprecedented detail, the fast processes involved when roots absorb water and other nutrients from soil,” said Christian Tötzke, who led the University of Potsdam research team. “A better understanding of these root-soil interactions could help optimize water use efficiency and crop production, which could help meet higher demands from an increasing world population and limited resources.”

In The Optical Society (OSA) journal Optics Express, a multi-institutional group of researchers describe how they accomplished record-fast imaging times for neutron tomography. The research is part of an ongoing effort to study the significant influence that roots have on the physical and chemical properties of surrounding soil.

“Because neutrons are highly sensitive to hydrogen — including hydrogen-containing compounds like water — high-speed neutron imaging can be used to visualize plant roots while simultaneously mapping the changing water distribution in soil,” said Tötzke. “It could also be used to study other dynamic transport processes such as the transfer of fluids in engineered or natural porous material systems.”

For example, high-speed neutron tomography could reveal new insights into the dynamics that occur during hydraulic fracturing and be used to study the behavior of lithium inside batteries to increase their durability and safety.

Neutron imaging is ideal for this application because when neutrons interact with atoms like hydrogen and lithium, they become highly visible while metals such as aluminum and titanium are mostly transparent. This imaging approach also distinguishes hydrogen isotopes, allowing an isotopically heavier water molecule known as deuterated water to be used as a contrast agent. This type of water is also well tolerated by plants.

However, the relatively slow acquisition speed of neutron imaging has made it challenging to use for time-resolved 3D studies of fast processes like water absorption. A neutron source available at the recently opened imaging facility NeXT-Grenoble at the Institute Laue-Langevin can provide the power needed for faster neutron imaging.

“NeXT-Grenoble has the most intense cold neutron flux for imaging purposes in the world,” said Tötzke. “However, making use of this high flux required us to optimize the acquisition parameters, which challenged the limits of the available technology.”

The researchers developed an imaging setup for fast imaging that included a highly efficient scintillator screen that converts neutrons to visible light and a scientific CMOS camera with a high frame rate. They used this setup to study water uptake of a lupine plant’s root system that was rotated at a constant speed while images were taken continuously.

“The data we acquired surpassed expectations not only in terms of acquisition rate but also signal-to-noise ratio and overall spatial resolution, showing that this approach was perfectly suited for studying how soil and water interact with roots,” explained Tötzke.

Now that the researchers have demonstrated the technical feasibility of fast neutron tomography, they plan to design faster cameras and better rotation stages specifically for this application. They also want to try adjusting the neutron flux to further push the temporal resolution of this technique. The fast imaging setup will also be incorporated into the NeXT instrument at Grenoble so that other scientists can use it to study fast transport processes.