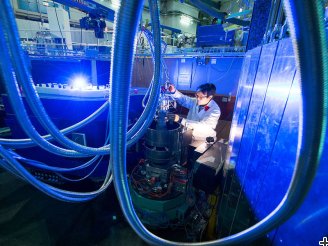 Scientists around the globe are trying to understand the phenomenon of loss-free electric power transmission by high-temperature superconductors. Materials that exhibit this effect at room temperature would bear huge technical potential. Recently symmetry changes in the electronic phases of high-temperature superconductors near their transition temperature had been attributed to doping effects. But an international team of scientists has now discovered that solely spin dynamics of the electrons are responsible for these spontaneous changes.

The location of atomic nuclei and binding electrons in a material is determined by its crystal structure. However, electrons additionally have an electromagnetic angular momentum, referred to as spin. When many spins become coupled in a material, electromagnetic disturbances with a preferential orientation can form, creating so-called nematic phases. Many researchers see a key to understanding the phenomenon of high-temperature superconducting in these nematic phases.

A group of scientists discovered microscopic impurities during investigations under a scanning tunneling microscope. They thus suspected that these impurities were responsible for the formation of the nematic phases – analog to silicon, where doping with minute impurities induces electric conductivity.

Dr. Jitae Park, a scientist at the Technische Universitaet Muenchen (TUM), and his colleagues at the Beijing National Laboratory for Condensed Matter Physics and the Department of Physics and Astronomy of Rice University in Houston/Texas, have now shown that this is not the case, but rather that a completely different effect is at work.

Using the PUMA three-axis spectrometer at the Heinz Maier-Leibniz Center in Garching (Germany), they investigated samples of a ferrous high-temperature superconductor doped with small amounts of nickel at various temperatures. The scientists proved that the formation of nematic phases has no direct relationship to doping with nickel.

Collective movements of electron spins, in contrast, have a strong effect on the formation of nematic phases. These form at temperatures that are significantly higher than the transition temperatures. The moment, the superconducting effect reaches its maximum, the nematic phase disappears completely.

“With our experiment, we have shown that the formation of nematic phases does not stem from doping effects, but rather is a result of sudden changes in the preferential direction of the movement of electron spins”, explains Jitae Park, who carried out the experiment at the FRM II Research Neutron Source of TU Muenchen. “Researchers will now be able to focus their future research on the relationship between spin dynamics in nematic phases and high-temperature superconductivity.”

Neutron scattering experiments on magnetism are extremely elaborate because they normally require numerous experiments at various neutron sources around the globe to obtain a complete set of data. In this case, the measurement data were collected in a series of cleverly designed experiments at the PUMA instrument in the record time of only four weeks.

The experiment also represented a particular challenge because the researchers could only use very small crystals. The scientists chose an iron pnictide, a compound made of iron, barium and arsenic, which they doped with small amounts of nickel. However, under normal conditions this material forms twin crystals, which do not allow measuring of nematic phases.

“The formation of twin crystals can be suppressed by applying pressure,” says Jitae Park, “but as a result we could use only very small crystals.” Thus the researchers opted to carry out the experiment at the FRM II Research Neutron Source in Garching because of its very high neutron flux.