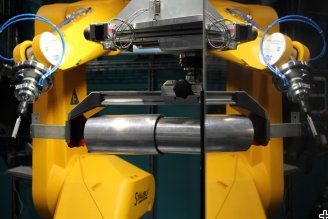 Aluminum blanks cannot be produced without residual stress. This means that the material warps during subsequent machining, which leads to inaccuracies. This is particularly problematic in delicate applications, such as aircraft construction. Neutron measurements at the MLZ showed that a new process is capable of reducing residual stresses almost completely.

In forged aluminum blanks, so-called residual stresses arise: This is because during necessary quenching in water, the temperature in the workpiece decreases faster on the outside than on the inside. As a result, the alloy components do not distribute themselves evenly, which results in stresses. This internal stress can lead to deformation and cracks during subsequent processing, which must be avoided at all costs.

How do you release residual stresses?

To reduce this residual stress, Prof. Jeremy S. Robinson tested “uphill quenching”. After quenching with water, the researcher cooled the material with liquid nitrogen and then reheated it with hot water or superheated steam for a short time.

The liquid nitrogen freezes out all alloy components. They are then distributed evenly during the subsequent heating process. In this way, residual stresses are minimized, which was shown for the first time by measurements with neutrons on the STRESS-SPEC instrument at the MLZ.

The engineering scientist from Ireland carried out his measurements on the STRESS-SPEC instrument. He found that heating with boiling water reduced residual stress by 20%, with superheated steam, calculated over the entire workpiece, but only by 14%. “This is because the steam has only a very local effect. Where the steam impinges, the residual stress is almost completely reduced. If we apply the steam over the entire surface, we can do much more. This is what we are currently researching,” says Dr. Joana Rebelo-Kornmeier, instrument scientist at STRESS-SPEC.

It has been long suspected that the method works like this. Since neutron diffraction has only gained in importance in recent decades, it was previously hardly possible to obtain quantifiable insights. Aluminum is more or less transparent to neutrons, so that – in contrast to X-rays – they penetrate very deeply and at the same time non-destructively.

Because residual stresses in complex parts have considerable disadvantages, industry has tended to use fiber composites (carbon fibers) in recent years. These are expensive to produce and – unlike aluminum – hardly recyclable. On the basis of the results, scientists are optimistic that aluminum will get a renaissance as a material.