Research confirms heating can increase strength of a type of hydrogel 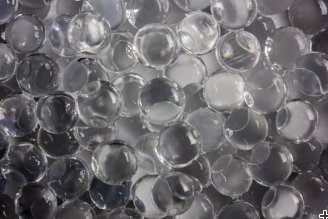 Small angle neutron scattering (SANS) at the Australian Centre for Neutron Scattering has confirmed that the strength of a type of supramolecular hydrogel can be increased by heating.

In collaborative research published in Soft Matter earlier this year, a group of Australian investigators led by Curtin University and the University of Western Australia, also confirmed that the selection of electrolyte plays a key role in determining the strength of a hydrogel formed by calixerene (bound with the amino acid proline).

Upon heating to 30° C, calixerene hydrogels formed with the electrolyte magnesium chloride increased in strength and maintained increased stiffness upon cooling.

The compound exhibited significant hysteresis (a memory of the initial structure).

The investigators pointed out that this unusual, reproducible behaviour did not result in a loss of water upon heating.

Because the gel stiffness got smaller over repeated annealing, it suggested a dynamic rearrangement process was occurring.

Co-author Instrument scientist Chris Garvey authors confirmed the model of what was happening to the gel structure following annealing over the temperature range 10-30° C using SANS on QUOKKA.

“SANS is the technique of choice for gelators because can determine how molecules behave in an ensemble while a parameter is changing,” said Garvey.

“In this study, the SANS data was consistent with the structural model and scattering curve calculations,” said Garvey.

The authors report that in the MgCl2 hydrogel this represents a change from the initial configuration of long, flexible fibres to short, straight fibres upon heating, which become long, straight fibres when the system is cooled.

The hydrogel formed with the electrolyte lithium chloride responded differently to annealing.

“One of my co-authors is interested in tissue scaffolding as part of dementia research but there are a great many potential applications for low molecular weight gelators,” said Garvey.

“The study was undertaken because there are still aspects of their behaviour that need investigation, such as how gel structure evolve over time and how to ensure the stability of load bearing structures.”

The University of New South Wales and the ARC Centre for Convergent Bio-Nano Science and Technology also contributed to the study.